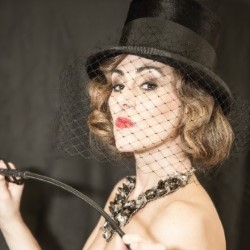 “I had the idea for MARGO in my head for about six years as her story is quite compelling.”

WHO: Melinda Hughes, writer and performer

WHAT: “Margo Lion, celebrated Weimar Berlin cabaret star and lover of Marlene Dietrich, is gripped by the decadence and debauchery of 1930s Berlin. This is the story of her tragic relationship with the lyricist Marcellus Schiffer, fuelled by alcohol, cocaine and jealousy set within a world of political unrest. Margo is packed with iconic Weimar cabaret songs by Kurt Weill, Mischa Spoliansky, Friedrich Hollaender and original songs by Melinda Hughes and Jeremy Limb who received four and five-star reviews from The Times and Musical Theatre Review for their satirical cabaret. Margo is directed by Sarah Sigal.”

This is actually my third time to Edinburgh and the experience gets better and better. I first came here in 2013 and did a one week run at Space Venues with a cute cabaret show called French Kiss. I returned in 2014 with ‘Cocktails with the Diva’ at Assembly Rooms. This was another satirical cabaret show packed with newly written songs and a jazz trio. We had a lot of fun!

I’ve done a lot of travelling and have performed twice in Barbados at a small festival which was amazing. I sang a Mahler 4th with orchestra in London which was a wonderful experience and I’ve also completed researching and writing and Margo which was a lot of work!

Margo Lion was a celebrated Weimar Berlin cabaret star and lover of Marlene Dietrich. She’s gripped by the decadence and debauchery of 1920’s Berlin and has a tragic relationship with her husband the Jewish lyricist Marcellus Schiffer. Their relationship is fuelled by alcohol, cocaine and jealousy set within a world of political unrest. Marcellus who suffers from bouts of depression, sees no way out of rise of fascism and overdoses and Margo flees Berlin for Paris in 1933. The show is packed with iconic cabaret songs of the day and is a rollercoaster.

I wrote the show myself. I had the idea for MARGO in my head for about six years as her story is quite compelling. I’m also producing it as I have a small company which produces cabaret, classical concerts and curates seasons.

We had two previews in London at JW3 which were well reviewed. It was quite emotional to see something I had worked on for so long to finally make it to the stage. I would love to take this show to small theatres and particularly to America.

They should go and see FRAU WELT also on at The Blue Room. Assembly Rooms for a double dose of Weimar. The show is so clever and he is an amazing actor. Its more of a Weimar fantasy but it is extraordinary and compelling!

I’ve only just started seeing shows but I recommend Rachel Parris – (she’s top of my list), Jess Robinson – an astounding singer, Flo & Jo, Dusty Limits, Adele Anderson and Austentatious. Ali McGregor’s show is always amazing. I also love stand up too and there’s just so much to choose from. So far only seen Robin Morgan who was great but will see Christian Talbot tomorrow (another favourite) For drama I recommend Diary of an expat which was clever, De Profundis with Simon Callow which was very moving and Song of Lunch with Robert Bathurst.