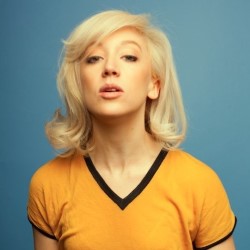 “I’m based in New York. The last time I ran this show here there was an English guy in the audience, so of course, I grilled him afterwards if there were any cultural references in the show that won’t make sense to a UK audience.”

WHAT: “Comedian Mary Houlihan tells the true (fake) story of her torrid romance with 82-year-old actor Jack Nicholson. Joke-packed storytelling, musical numbers, visual aids and a giant talking Jack Nicholson head. Think A Star Is Born, but dumb (in a good way). Mary has been lauded by Vulture, Forbes and Entertainment Weekly, and was named the ‘best of what’s next’ by Paste Magazine, and a ‘comedian we love’ by Time Out. She has written for The New Yorker and McSweeney’s and appeared on Broad City, Difficult People, The Chris Gethard Show, Jimmy Kimmel Live and more.”

Yes! This is my first time going to Edinburgh, or anywhere in Europe really. I’m based in New York. The last time I ran this show here there was an English guy in the audience, so of course, I grilled him afterwards if there were any cultural references in the show that won’t make sense to a UK audience. He said no, and also very excitedly alerted me that one of the pictures in my slideshow is of The Sugababes. I had no idea who they were!

It’s my first time here, so let me think if there was anything cool that happened this past year… Well, I played a wacky neighbor in a couple episodes of “Danny’s House,” a new TV show starring Danny Brown, a U.S. rapper (do you guys like Danny Brown there?!). That was really fun. I also had a tiny part on an episode of “Broad City.” Also I got flown out to Montana to do my show that I’m bringing to Edinburgh, in this fancy renovated movie theater. It was -18 degrees Celcius outside, and there were these gorgeous snowy mountains all over the horizon. That was a pretty cool getaway from New York. And I got an essay of mine published in McSweeney’s Quarterly (again, I’m not sure if anyone’s heard of these things over there!). The essay is mostly about my Irish and Irish-American relatives’ experiences with Irish-English conflict, as perceived through my very nominally-Irish American eyes.

The show is a comedic one-woman show about my fictional biography, particularly my wild (again, fictional) romance with Jack Nicholson. It’s heavily inspired by two movies, “Yankee Doodle Dandy” (1942) about an Irish immigrant’s journey from impoverished Vaudeville actor to Hollywood star, and Scorsese’s “New York, New York” (1977) which is… well, it’s basically the same story as “A Star Is Born.” So I’m the talented young starlet and Jack Nicholson is the romantic curmudgeon.

I wrote and directed it, and am on stage the whole time, acting with my “co-star,” which is an animated picture of Jack Nicholson’s head which speaks in pre-recorded dialogue. I’ve performed it in New York City, Montana, Buffalo, Rochester, and Los Angeles. After Edinburgh, I think I’m gonna go home and write a new show.

A lot of really cool Americans are going this year, who people may not be familiar with. I would HIGHLY recommend seeing Jamie Loftus, Catherine Cohen, Dave Maher, Emmy Blotnick, Anna Drezen, and Zach Zimmerman, who all have solo shows at Fringe. I’m really excited to see their shows and have some familiar faces around during my trip.