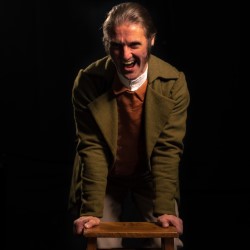 “Steve Buscemi, Michael Gambon and Simon Pegg were in my category to name a few so I was chuffed to bits to be in with these A-Listers.”

WHAT: “In his cell, woodturner Daniel McNaughton, wronged by his father, dismissed by the Glaswegian legal establishment, awaits sentence for his botched attempt to shoot Prime Minister Robert Peel. Lawyers are keen to use him as a test case for pleas of insanity in murder trials. Whatever the outcome, it will set a precedent for a hundred years… The McNaughton Rules. This prize-winning dramatic monologue by Steve Gooch is both powerful and engaging but is also laced with rueful humour.”

No I’ve performed at The Edinburgh Fringe before in 2008 in a Play called “The Pipers Trail”
Where I was part of a large cast and I played 6 different characters. McNaughton being a one man play will certainly be different to say the least.

I was nominated for BEST SUPPORTING ACTOR for Playing “Wallace “ in Feature film “RETREAT’” at the NATIONAL FILM AWARDS in January and the Ceremony was in London late March. Steve Buscemi, Michael Gambon and Simon Pegg were in my category to name a few so I was chuffed to bits to be in with these A-Listers. An amazing experience.  RETREAT was also nominated for BEST FEATURE FILM

McNaughton is a one man play that tells the story of Glaswegian Woodturner ‘Daniel McNaughton’ Who tried to assassinate Prime minister SIR ROBERT PEEL in 1843.

His court case was used as a test case in his plea for INSANITY, which changed LAW forever in Britain. McNAUGHTON was written by Award winning Playwright Steve Gooch and Directed by Christine Kimberley.

Skelf Productions are Producing the show and on its first run at the Edinburgh Fringe.
There are plans to tour the show after the Fringe.

I would definitely go see “ZOMBIE ZOO” at the Hill Street Theatre. Basically set in a Zombie prison with lots of song Dance and Humour. No doubt a few Brains getting eaten so no doubt a good laugh.