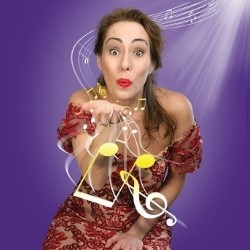 ” I will sing original songs about internet trolling, selfies, cougars, hipsters, sex-pest cowboys, as well as Melania Trump’s Diary entries which has become a hit feature of my shows in London.”

WHAT: “Backed by a live jazz trio, Melinda’s show is a sophisticated romp through social and political satire, packed with provocative original songs on internet trolling, cougars, hipsters, sex-pest cowboys as well as an appearance by Melania Trump. Melinda has been a sell-out success at Crazy Coqs (London) and The Metropolitan Room (New York). ‘So clever… every pun hit the mark’ **** (Times). ‘Delightfully playful, devastatingly funny and deliciously entertaining’ ***** (LondonTheatre1.com). ‘Scandalous and timely’ (Vanity Fair). ‘A brilliant cabaret goddess, a satirist of high order’ (NewYorkSocialDiary.com).”

This is my third time at the Edinburgh Fringe. Last year I came with quite a dramatic show called Margo half woman half beast set in Weimar Berlin during the rise of the Nazis. This year is good old fashioned satirical cabaret.

Probably spending time performing in Barbados. I took part in a wonderful music festival at Cobblers Cove, guesting with the US a cappella group The Harvard Din & Tonics and also performed a concert of my own. It was a wonderful experience and I hung out with Cliff Richard!

Off the scale is a fun-packed musical romp through social and political satire. I will sing original songs about internet trolling, selfies, cougars, hipsters, sex-pest cowboys, as well as Melania Trump’s Diary entries which has become a hit feature of my shows in London. I’m still in the middle of writing it as so many things are happening in the news, I have to change links and lyrics.

I formed my cabaret group Kiss & Tell with my co-writer Jeremy Limb in 2007. We have performed at festivals and events as far afield as Beirut. This year my MD will be Michael Roulston. We’ve written a brilliant song together especially for the show and it will be previewed in London at the Canal theatre cafe and The Pheasantry.

I’m a big fan of comedy so already on my list is David O Doherty Michale Legge, Lucy Porter, Marcus Brigstocke, Robin Morgan and Simon Evans. I always catch Austentatious as they are so clever.