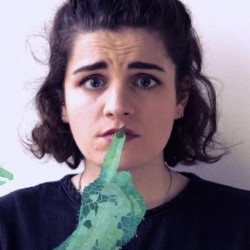 “At this early stage, we’ve decided that we would like to work together in the future.”

WHAT: “Charlotte was a legendary Hollywood props mistress who disappeared from public view decades ago. Now she lives in retirement, with no one to keep her company except the cleaning lady and a mysterious voice coming from her cupboard. Can a young journalist coax her to reveal what happened all those years ago? And who is it who keeps calling Charlotte ‘mother’?”

Lewis: This is my first fringe and I’m very excited to be at the beginning of what will hopefully be a long journey for our new collective. With the collective, I’m looking to bring everyone forward and progress as a group. Despite only acting in theatre through first year, I’m very happy to be working on the production side of things starting this fringe. Moving forward it gives me chance to express myself creatively in different ways.

Eduardo: This is my eighth fringe so far. In my first 6 years I performed acapella with a male group, and in my seventh year I performed ‘American Idiot’ with Edinburgh University ‘Footlights’. Working as a smaller collective has a different performance dynamic and more freedom. This is my first time doing straight theatre as a smaller group, which more collaborative and already feels more intimate and productive. A fear with every free show is that whether or not people are going to come, but not having that fear means you’re not putting your all in to it. All that does is make us push for publicity which will just work in our favor.

Arabella: This is my second fringe. My first fringe was spent performing with group that combined Manchester University and Edinburgh University students. Last year, working with a big theatre collective meant it was a different experience than the smaller collective we’re working with now. This experience has felt more involved creatively and productively, along with having a role as cast in the play. I’m looking forward to seeing how our show will be received because we’ve been working on it for a long time and feel really connected to it, so it’ll be exciting to share it with other people.

Emily: This is my first year at fringe. I recently moved to the UK from New York, so I’m really excited to experience the intensity of the festival. I love how the city becomes open to artistic expression and a center of art during the fringe. I’m excited to be part of a new collective that feels cutting edge and open to exploring different aspects of the show. I’ve loved not being too strict with the script and letting it grow organically.

Erin: This is my first year at the fringe, and I’m so excited to be doing it with our collective. The process has been so involved and equal, giving the chance for all of us to become really close to the story and how we want to communicate it. Having the chance to work at the fringe has been such a privilege, and I’m so excited to experience it as a visitor and creator!

Lewis: Since last year, I have finished my first year at Edinburgh University and dived in to straight theatre as opposed to musical theatre. This has changed my perspective and renewed my love for theatre, despite only being in two plays before.

Arabella: I have since graduated from Edinburgh University. This year, I’ve done more drama than ever, having three main parts in uni shows. This has been my biggest year and only time in drama apart from school. This is because of my focus on skiing in first three years of University. My first year at fringe was last year and was my first time in theatre, meaning its my fifth show of the year and final University show!

Emily: I have really delved in to the theatre community in Edinburgh and experienced the characteristics of the city. I’ve grown as performer through being exposed to new ways of approaching acting and directing. My worldview has been expanded in a way that has grown my approach to acting.

Erin: Since last fringe, I’ve involved myself in theatre in a way that I’ve been so pleased with. Since involving myself in the theatre community in Edinburgh, I’ve felt so welcomed and pushed creatively in ways that have made me grow as a person and professionally. I’ve learnt lots of new things from so many people and I’m so excited to continue in my next two years at University.

Collaborative answer: The writer of the play, Rory Kelly, booked a run for fringe and was then looking for a team to help put it on. Lewis and Erin decided to direct and produce together. We then held auditions and cast those who would be best in the roles, and on top of that found that we gelled really well as a collective! At this early stage, we’ve decided that we would like to work together in the future. After the fringe, we have been discussing keeping Rory Kelly on as a writer. Additionally we may go in a different direction, however we have decided to keep the process as collaborative as possible. This would mean choosing scripts as a team and keeping everyone as involved in creative decisions as possible!

Teddy: Footlights ‘RENT’ because it’s always nice to support other theatre groups from our University

Emily: ‘Number Please’ because of the collectives feminist ethos!

Erin: Never None (But She) because it incorporates the same messages of feminism and inclusivity that we want to promote in our show