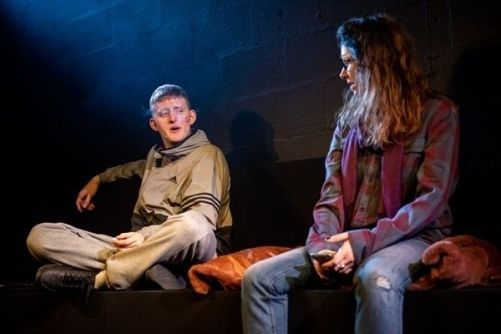 “Knockout performance: quick, fierce, and smart but always on the edge.”

As Edinburgh plays go, this one is outspoken. Its audience is there to be stuffed and startled. Do you ‘live’ or do you ‘stay’ in Edinburgh? Whatever, wherever, you are unlikely to say – as you look out over the city – “See they flats?”. For a start the grammar’s wrong: amusing, sure, but plain wrong unless you’re local and out of school. Second, those flats are way over there “in the bit nobody looks at”. Not Muirhouse, as it happens, but more likely on the Southside, in Gracemount or Craigmillar. That’s where Declan (17) lives with his mother, her boyfriend, and his little sister, Sian. Declan’s father killed himself when Declan was seven. He was an alcoholic and everyone says Declan will end up just like him.

Libby (46) is not from Morningside, but possibly close to; the Grange maybe, or even Fairmilehead which always sounds nice. For Libby is nice and her mother listens to BBC Radio 4. Mouthpiece tells the story of Declan and Libby; posh woman who used-to-be-a-writer meets radge schemie. In the end it is perfectly possible to consider it a love story but it’s Declan’s love for Sian that really touches you.

This play’s energy pours out of Declan. It’s pure, vehement fun one minute – a verbal battering of Libby’s proper speech (and attitudes mebbe?) – but then it’s full of despair and longing the next. Lorn Macdonald delivers a knockout performance: quick, fierce, and smart but always on the edge: “I ken what precarious means, I’m no daft”.

Neve McIntosh as Libby can fall back on herself and land safely, even comfortably, by the end. She has the background and the education that is not available to Declan. She uses ‘Professional’ status as a defensive excuse that will make you queasy. McIntosh’s performance is finely judged; never provocative or clever but – if anything – rather shy and vulnerable. But she has two parts to play: one, with Declan, and the other with us, an audience of posh cunts. (Sorry, but that’s how it is and you’d better get used to the word if you’re going to see Mouthpiece). Libby talks to us about her story, ‘her’ play. Was it ever Declan’s?

Designer Kai Fischer and writer Kieran Hurley frame the work within a stark rectangular set that Libby steps easily in and out of. The shock quotient when Declan does the same goes off the scale. Projected text is used to identify place and time and to underwrite the action (as if penned by Libby). When that fractures and Declan disputes what is happening is both unsettling and dramatic. It also arrests a formal, ‘meta’ narrative before it gets too precious.

Mouthpiece is artistic director Orla O’Loughlin’s last show at the Traverse before she goes to London’s Guildhall. It displays the same drive and attack that distinguished her Devil Masters from 2014. There may be no expensive New Town interior to trash – Hurley’s script does that all by itself – but her hold on what matters is just as tight and uncompromising. The play will not bring much comfort and cheer for Advent but it does send you out with an important sense that the hurt and the dispossessed are never far way. Little Sian’s name might mean ‘God’s precious gift’ but no-one is giving Declan any presents this Christmas.

The applause came in fast and loud at the final blackout. Too fast. The performances are outstanding and deserve it but Mouthpiece is one of those plays that is yelling at yous to shut up and think.

Visit Edinburgh49 at its Traverse archive.