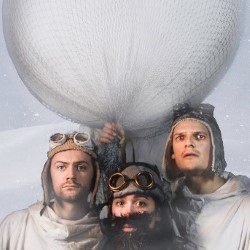 “Friends are either made stronger or broken at the Fringe!”

WHAT: “In 1897, three explorers took off to the arctic in a free-flying balloon. Behind them, they left a woman who could not forget them. Winners of the Les Infants Terribles Award 2019, Dead Rabbits present a highly visual and physical journey through whiter than white nights and darker than dark days, where nothing is what it seems. A tale of love, loss and strange power of the human heart. Presented by Dead Rabbits. Recipient of the 2019 Greenwich Partnership Award.”

This is my 4th Edinburgh and 6th show at the fringe – although its the first time for Dead Rabbits Theatre Company.

My first show was back in 2009 (I think). Back then I was performing and using a highly visual and physical style to tell stories with music and comedy. The trouble was I wasn’t very funny… Its why I started working backstage. You did not need to make people laugh and rarely had to remember your lines. Interestingly this show is working with the same director, 10 years later. Friends are either made stronger or broken at the Fringe!

This year has been amazing. We have won the Les Enfants Greenwich Partnership Award 2019, been awarded Arts Council funding to make a new show – Some Little Entertainment in These Troubled Times and made some great friends – including Greenwich Theatre James Haddrell who is helping with PR. We have been part of a project in Woolwich looking at how we make performance accessible to a local community which has involved workshops and collaboration with partner organisations of the University of Greenwich and have now forged a friendship with Laura Goulden who will be interpreting a show for us in British Sign Language in Edinburgh on the 20th August! The first time we have done this. I also can’t thank the Pleasance, Les Enfants and Greenwich Theatre for the opportunity of performing in the King Dome this summer!

The show – My Love Lies Frozen in the Ice – Is about the true story of 3 explorers who head to the arctic in a hot air balloon leaving the love of their life behind. Told through her eyes this is really a story of love, exploration, the human spirit and chauvinism.

The company are all past graduates from St Mary’s University. I graduated over 10 years ago, and the cast have graduated earlier than this, some as recently as 2 years ago and others 6 or 8. Our director, Kasia Zaremba-Byrne all taught us at one time or other.

I have only been involved with the work since the summer of 2018 as Kasia called me and said I need some help making the work seen in the UK. Hopefully, I’ve started to achieve this? Before this, the work toured North America in 2017 and won lots of awards! (Of which I can take no credit). We have had limited show dates in the UK but have a preview at the Bathway Theatre in Woolwich on the 25th July. It’s free!

SharkLegs, Fulfilment (Underbelly) – Because I am intrigued. They are supported by Greenwich Theatre as well so it will be good, but I like the idea it is created form the audiences desires each night. No clue what this means but worth a punt I’d say!

Perhaps Contraption, Nearly Human (Pleasance) We met these guys at the Les Infants Award. They were winners as well! Who does not like a huge band and nice people done in a way I’ve not seen in a while and well…

Incognito Theatre, The Burning (Pleasance) They won the Greenwich Partnership award last year. Women & Witches has me hooked. Also, I’m curious to see if this follow up from last years show is as good!

Haste Theatre, Ex Batts And Broilers (Assembly Rooms) Clown, Physical Theatre comedy and meat farming… What not to like!

Wonderbox Theatre, A Womb Of One’s Own (Pleasance) I feel like feminism is a theme here… Or perhaps shows which showcase women… not sure. Anyway,I think it will be good.

ChatBack Theatre and Comedy, If This Is Normal (Zoo Playground) – I thought their previous work “Lost in Thought” was fab. So looking forward to this one

New Diorama Theatre, The Incident Room (Pleasance) – I think anything the New Diorama touch is gold…. So I hope this is no different!

2Elfth Night (Venue 152) – So a bot of a wildcard. We have become twitter friends and they seem like good fun

Bait: Kill The Princess (Spiegel Yurt) Saw this at the Bathway Theatre in Woolwich. They are a lovely pair and funny! Also, they have promised to make a show with me called Dave the Unicorn where they brush my hair in a live art sort of way… I mean I think they were joking but… Also, a Bathway Theatre Network supported company – so part of the club.

Handprint Theatre, Moon Bird (pleasance) – a family pic, but also completely accessible! Which is exciting for the fringe. Laura is BSL interpreting our show on the 20th August!

Probably loads more – sorry If I have forgotten you