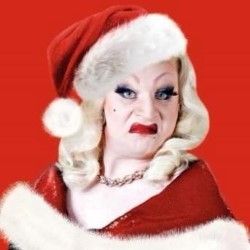 “Getting to see me LIVE and in the flesh was a pretty big thing to have happened to those 3, 000 people!”

WHAT: “The self-declared siren of south Yorkshire presents a festive spectacular! In August. Join Myra DuBois for an hour of off-season seasonal singalongs and summertime yuletide anecdotes from her Christmases past, all delivered in her trademark acerbic wit! ‘A display of caustic sensibility and razor sharp wit’ (Scotland on Sunday). ‘Proper stand-up… brilliantly delivered’ **** (BroadwayBaby.com). ‘Hilarious… comedic timing that never misses a beat’ **** (Edinburgh Festivals Magazine).”

It most certainly isn’t! I’ve served seven long years at the Fringe in various capacities, from ensemble shows to solo spectaculars! Although, saying “served” sounds awfully pessimistic doesn’t it? It’s quite ‘trendy’ to grumble about the fringe but I love it. Whisky and show business! What more could you want?!

The doctor put me on these new tablets and I don’t think these are the placebos, which is lovely! Also I JUST supported the celebrated transvestite Bianca Del Rio on her UK tour, playing to packed houses of about 3,000 people a night! Getting to see me LIVE and in the flesh was a pretty big thing to have happened to those 3, 000 people!

Well, it stars ME and it’s produced by So Comedy/Broken Robot productions by arrangement with ME and I suppose it was written by ME – although can we call off the cuff musings “writing”? It’s essentially just me talking about Christmas for an hour with some songs thrown in. But WHY NOT?

I encourage all your readers to absolutely AVOID seeing Frank Lavender’s awful little show “Gotta Laugh?” at the Counting House Lounge at 6pm everyone. He’s a WOEFULLY unfunny comedian and I curse the day my sister became romantically involved with that man. He’d have you believe we’re close, but this is FAKE NEWS. I repeat, do NOT see Frank Lavender’s ‘Gotta Laugh’ at the Counting House at 6pm!