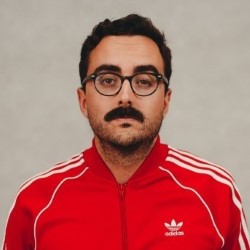 “It’s easy to forget to eat during Fringe and things still close relatively early in Edinburgh.”

WHAT: “Daniel Muggleton is an Australian stand-up comedian wearing a tracksuit. His debut special, Let’s Never Hang Out, aired multiple times on ABC Comedy and is now streaming on Prime Video. He’s been hand-picked to support Jim Jefferies, Tom Stade and Steve Hofstetter on tour, was selected as one of Four Great Free Fringe Shows by The Scotsman in 2019 and his stand-up clips have millions of views online. ‘A foul-mouthed prophet’ ***** (Advertiser, Adelaide). ‘Never preachy… deceptively smart’ **** (Chortle.co.uk).”

WHERE: Laughing Horse @ The Counting House – The Lounge (Venue 170)

No, but it’s the first time since 2019 which feels like a very long time when you’re used to going every single year. It’s also the first time I really wasn’t planning to go… and then changed my mind last minute. So this is a real test, because if it’s a disaster I’ll never do anything impulsive again. That actually seems like kind of a rash decision in itself, so you can see how much I have riding on this month.

I’ve learned that as a person with a moustache, people treat you very differently when wearing a face mask. It feels like I’m cat-fishing the world. I have also learned that it’s actually not that easy to get someone pregnant, meaning I was pulling out unnecessarily for years.

I’m a stand-up comedian so I did everything you’re describing. I also did it without government grants, bursaries or prizes and expect to make money from the show, like a good capitalist. I’ve done the show at Australian festivals in the front half of 2022, and will tour it regionally from September… after that I’ll film it and put it on YouTube and then move on with my life.

After they’ve seen my show it will be about 8:15pm, so I reckon maybe grab a bite to eat? It’s easy to forget to eat during Fringe and things still close relatively early in Edinburgh. After that I reckon Bobby Mair is a good bet, if you’re willing to consider the next day as ‘after’ then there’s also Red Richardson and Garry Starr is an Australian act who smashed in domestically in 2022.