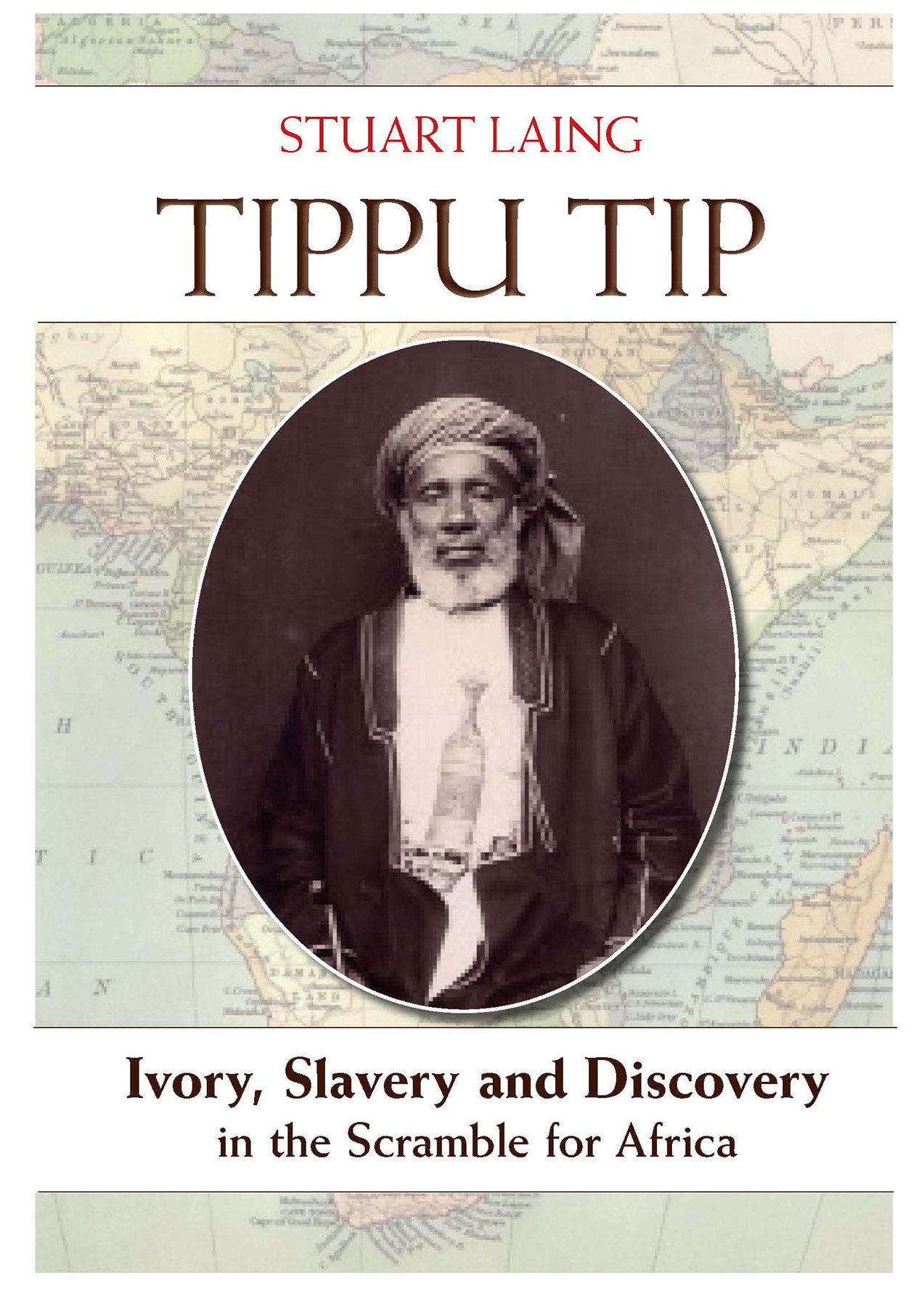 “…he was an intriguing character, combining traits that we admire and some that we don’t. On the negative side he was violent and ruthless, and yet he clearly had a sense of humour and was good company.”

WHAT: Tippu Tip was chiefly an ivory trader, who pioneered for new sources through present-day Tanzania into the Congo basin. Slavery is part of his story, because Arab traders of the time used slaves as porters and sold slaves through the market in Zanzibar to work locally in plantations and beyond in the Gulf and Persia. He was a pioneer of discovery, both in Arab terms and because this was the great period of European exploration in East and Central Africa: he assisted most of the famous explorers, including Livingstone and Stanley, when it served his interests.

He can be seen as an Afro-Arab exponent of empire, as his commercial ambitions could only be realized by means of Arab territorial control and colonization. His colourful life culminated in his engagement as governor of a province in the ‘Congo Free State’ of the Belgian King Leopold, and in his involvement in Stanley’s astonishing expedition to relieve Emin Pasha, governor of the Egyptian southern province of Equatoria. Uniquely among Arabs and Africans of this era, Tippu Tip wrote an autobiography.

Stuart Laing draws on this and other contemporary sources to give a graphic account of the life and times of this energetic, resourceful, ruthless but often humorous operator. We watch him as he accumulates wealth and power, but then has to stand by helplessly as the British and German colonial machine carves up the territory of his friend and protector, the Omani Sultan of Zanzibar, and as the Belgian empire in the Congo drives the Arabs out of the trading areas of influence they had established west of Lake Tanganyika. This book is the first thorough investigation in English of this significant figure. The lucid narrative unfolds against the political and economic backdrop of European and American commercial aims, while allowing the reader to see the period through African and Arab eyes. The fascinating figures who strutted the 19th-century African stage, and their hardly believable exploits, give this book an appeal reaching beyond the African specialist to the general reader.

Between 2008-18 Stuart returned to Corpus as the College’s Master. He continues to research and write on Arab and East African history. His previous writing projects include a book on the history of Britain’s relationship with Oman – co-authored with a fellow former Ambassador to the Sultanate, Robert Alston.

Stuart is a keen amateur musician; he plays keyboard instruments and the oboe. His other recreations are desert travel and hill-walking. He is married to Sibella (herself a graduate in History of Newnham College, Cambridge) and has a son and two daughters.

Two reasons. One personal, and the other from a historical perspective. The personal one is that he was an intriguing character, combining traits that we admire and some that we don’t. On the negative side he was violent and ruthless, and yet he clearly had a sense of humour and was good company; and he was unusual in having a wide interest in the world outside his own. The historical reason is that his life offers a prism through which we can examine important threads in African history of the period – the ivory and slave trades, the world of the explorers, and of course the Scramble for Africa. And all of these threads have resonance today.

Tippu Tip’s memoirs provide a uniquely African voice. Why did he write them?

Well, it’s an Arab-African voice, even a Swahili voice. And I find it impressive that his memoirs, recalling events decades earlier, are vivid and accurate – accurate in the sense that, when he reports encounters with European travellers or others (eg colonialists), his accounts tally closely with those made by people keeping careful records at the time. Why did he write them? He was persuaded to do so by a far-sighted German consular official, Heinrich Brode, whom he met in Zanzibar.

Tippu Tip made his fortunes trading in people held as slaves. Did he ever express a view as to the morality of slavery?

Well, I think this assessment need modifying. He made his fortune from trading in ivory; but undoubtedly he used slave labour, as well as free men, to carry his goods. So we must assume that he bought and sold slaves, but this was not his primary business. Yes, he does talk about the morality of slavery, for example in a long interview recorded by the Belgian explorer and colonial official Jerome Becker. He says, “A domestic is free and leaves his master when he feels like it. My slaves wouldn’t think of leaving me – they’re too content with what they have”, and more in the same vein. We have to remember too that Arab Muslims of the time were convinced that slavery was permitted by the Qur’an, and that all their religion required them to do was to treat their slaves well. Not all of them did, however.

The Europeans missionaries and explorers learned much from their contact with Tippu Tip. What did he learn from them?

Interesting question. With the missionaries and explorers Tippu Tip enjoyed discourse about the world outside Africa, some of which (I mean news of the growing interest in European expansion and acquisition inside Africa) he would have found alarming. With Europeans more generally, of course, he benefitted materially from his contact with European traders, for example in buying barter goods and firearms, and in selling ivory. I don’t think that he or his East African contemporaries had much to learn from them in commercial or banking practices – these were quite well developed (notably by the Indian immigrant communities) in Zanzibar, Mombasa and elsewhere, at that time.

The period you narrate is one in which the dice are yet to fully reveal a predominantly Arab, African, or European outcome. What ultimately tipped the balance?

If by that you mean the shift towards Africa for the Africans, I suppose we can say that the preamble to the Scramble resulted in the Arab presence in East Africa diminishing markedly, and the era of European imperial control lasting 70-80 years from roughly came to an end with the “Wind of Change” and independence for British and others’ possessions in the 1960s. But we mustn’t forget that, under a Protectorate arrangement, an Arab Sultan sat on the throne in Zanzibar until 1964.

If you could have accompanied Tippu Tip on one of his journies (from start to finish) which would it have been?

Difficult choice! I guess his second, since this was in new territory, south of Lake Tanganyika, and it would also have given me the opportunity to meet David Livingstone, who joined up with Tippu Tip for a few weeks in 1867. Closely after that would have been chance to meet and travel with Stanley, but that would have been Tippu Tip’s third journey, which was 12 years, and too long for me!

You yourself have travelled extensively in the region. What’s the best advice you can give to a potential follower in Tippu Tip’s footsteps?

What’s your favourite recipe for cloves?

Regrettably, I’d have to say mulled wine! But also don’t forget your cloves when cooking ham. And of course delicious with apple pie or strudel. In the past, they used cloves for the relief of toothache, but I believe that’s not recommended nowadays.

A historical marker locates Tippu Tip’s house in Zanzibar. Are his life and times still well known in his region?

Yes, quite well, but I hope my book will widen the knowledge. I’m delighted that Medina Publishing have done a deal with a publisher in Dar as-Salaam, and a cheaper edition of my book, in paper-back, is available on the local market there. And a team of German film-makers are currently working a documentary about Tippu Tip.

What will be your next big writing project?

I’m starting to write about the abolition of the slave trade and slavery in East Africa and the Indian Ocean. Lots has been written about the transatlantic trade, but “the other” slave trade is less well known, though in fact just as important. It’s of course a sad, often tragic, story, but one that must be heard.