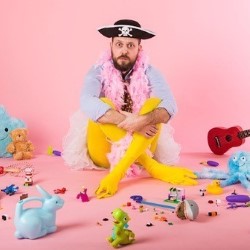 “I keep telling her to get a job, but she says she’s too busy inventing a machine that enables her toy dog snowflake to levitate.”

WHO: Owen Roberts, Writer and Performer

WHAT: “After a severe case of writer’s block, Owen has thrown caution to the wind and decided to let a child write his show for him. Kids are funny, right? What could possibly go wrong? She can’t spell, she can’t sit still for more than 30 seconds, and her ideas are wildly unrealistic to say the least. This show is about the weird stuff children think and how bloody difficult it is to work with them. From one third of sketch legends BEASTS: ‘A tsunami of silliness’ **** (Telegraph).”

WHERE: Pleasance Courtyard – Pleasance This (Venue 33)

No, I’ve done 5 fringes with my sketch group Beasts. However this is my first time doing it as a solo artist. Which is why a few months ago I caved in and asked for help writing the show, however the only person available was a six year old child, so she’s writing it now.

I moved in with a six year old, she’s basically my housemate now, except she doesn’t pay any bills or rent, or do any house work. I keep telling her to get a job, but she says she’s too busy inventing a machine that enables her toy dog snowflake to levitate.

My show is called ‘I Let A Six Year Old Write My Show’ because that’s what I did. She writes the material, I have to perform it, and honestly the drivel she’s come up with. One minute I’m supposed to be playing a Chinese police woman disguised as a burglar fighting a dancing crab, the next I’m trying to eat a volcano with my foot, it’s chaos.

I’m also performing with my sketch group Beasts 16-19 Aug, also one of the other members of Beasts Ciaran Dowd is doing a solo show called ‘Don Rodolfo’, so check that out too.