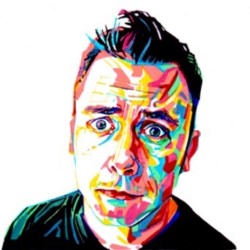 “The first year I did a show where at the last minute we decided to give away free tea and biscuits. We had a 140 seater room and we said we’d be happy to get 20 in. We ended up filling it nearly every day. “

WHAT: “It’s hard to do good when everything’s falling apart. Paul Savage had a weird year, that really made him look inside himself. That’s never a good thing. Contains great new jokes about depression, identity politics and jewel heists. ‘Brave enough to be offensive, with a number of insane anecdotes. Shades of brilliance lurk here’ (ThreeWeeks). Top 10 Jokes of the Fringe 2017 (Guardian, Mirror, Esquire, Shortlist, Week). ‘An engaging and affable labour of love from a man determined to find comedy in the unlikeliest of places’ (BroadwayBaby.com). ‘Genuinely brilliant. An all round hoot’ (Guardian).”

It’s my 7th time in 8 years, 5th solo show, and I think the 17th show I will have done for the full run. I didn’t do 2012 because I had Olympic tickets. The first year I did a show where at the last minute we decided to give away free tea and biscuits. We had a 140 seater room and we said we’d be happy to get 20 in. We ended up filling it nearly every day. Never underestimate how much the great British public want a sit-down.

Did the same again next year, with anothr 3 hander and free tea and biscuits. Then in 2013, started with my solo show Cheerful Shambles. That was very fun, then next year did the very fun (but utter nightmare to write) show “Paul Savage finds all the jokes in the bible”. That had a lot of nice reviews, mostly from its very hooky title. Then the next year, the difficult third album “Tired And Emotional”. It had some of my favourite bits but I was very jaded with comedy and it never came together as a whole. That year, I also did my gameshow Hell To Play (A gameshow set in Hell, hosted by the devil. I played Bernard Manning, a virgin sacrifice, and God, as a cockney gangster), which was the most fun I’ve ever had at the Fringe. It was riotous. Proper things falling apart in a sweat soaked box that stinks and shows running over by 15 minutes because there was too much laughter Fringe experience. It was great.

Last year’s show was called Paul Savage is set to self destruct and was really fun. Probably the best “show” show i’ve put together. And then this year’s show is called “Do Gooder” and is about trying to be a better person despite everything falling apart. Too early to say if it’s better yet, but it has some real nice set pieces and i’m building and rewriting and editing. I’m also MCing the late show for AAA at the Pleasance with Sakia Preston and George Zach.

Biggest thing is, I bought property. It’s a 41-foot narrowboat I live on and is both the best and worst thing I’ve done this year. There’s a lot in my show this year about narrowboat maintenance and your problems not going away because you transfer them into a leaking tub with a knackered shower tray moored in Birmingham.

It’s a show about trying to do better. I had some heartaches last year. My girlfriend cheated on me, a sitcom I was writing for RTE that we wre told was a lock was cancelled when they made a very similar idea, and I had a couple of friends die in their 30’s. So, it’s sort of about seizing the moment but also that doing so will have consequences.

I tried it out in Leicester, and it went ok, and then it’s been to Brighton and Wandsworth and various other places where I learnt some horrible and useful lessons on marketing and so on. I’m hoping I can get the show funny enough to hang in some sad bits because they have to have load bearing jokes underneath. Otherwise, it’s just pointless self-indulgent mawkishness.

I am contractually obliged to say see me at AAA late at the Pleasance (23:00) although you should, I’m really looking forward to it. It’s a hot sweatbox of a room and a rowdy late night crowd and those sort of rooms are always fun for me to compere.

Darren Harriott will be great. He always is. He smashed the arse off the gig I run in Birmingham. Laura Lexx I reckon is gonna take a step up this year and cement herself amongst the big dogs. But lovely dogs, like a red setter or something. Rob Kemp’s gonna be very interesting as it’s a show about he cannot possibly follow up on his last show The Elvis Dead which I maintain is maybe the best show I have ever, ever seen. He’s a very funny boy. I always say boy despite the fact he’s 4 years older than me and has a mortgage because he has the sort of childlike glee of a smart kid who likes taking apart things to see how they work. Great when it’s Mechano, bad when it’s a kitten.