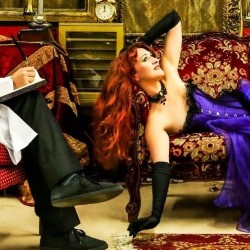 “It’s a semi-autobiographical cabaret, but with a quirky setting: I am an asylum patient.”

WHAT: “Powerhouse madwoman Miss Monica Salvi brings back to Edinburgh her scintillating cabaret tour-de-force, with finely-tuned musical gems administered with the aid of her psychothera-pianist. Winner of Best Cabaret Award (NY’s United Solo Festival). ‘Salvi is endearing, funny, and sexy, inviting her fellow “patients” into the darkness with her, always with a wink and a clever costume change’ (TheatreInTheNow.com). ‘Incredible voice and a perfectly judged repertoire of songs. A stunning cabaret, full of wit and weirdness’ **** (FairyPowderedProductions.com). ‘Gem of a show’ **** (FringeGuru.com). ‘A performance of dark, entertaining beauty’ ***** (TheMumble.net).”

This is my third time as a performer/producer. But I’ve been coming every year for the past 6 years, because it’s like an addiction! When I cannot afford to take a show to the festival for the full run, I just visit it for a few days to enjoy the atmosphere and support other shows.

It’s such a thrilling experience for an artist, whether you are performing or not, as you literally breathe an air which is highly charged with creativity, and you go back home full of inspiration and ideas waiting to be put into reality!

I had my off-Broadway debut at United Solo Theater Festival in New York in 2017, it was exciting but daunting, as I had no idea how the American audiences would react to my quirky show and whether they would like my performing style…

In the end they did, and I came out of it with a Best Cabaret Award!

It’s a semi-autobiographical cabaret, but with a quirky setting: I am an asylum patient, who, during the recreational hour, entertains her fellow inmates, by recounting how pursuing a theatre career and being often typecast as a mad woman, allowed her an exploration of her own psyche’s demons. It’s my true story, but obviously fictionalised (I haven’t ended up in an asylum, yet). Most of the songs in the show are from the musical theatre and cabaret repertoire, and the characters are characters that I have portrayed on stage in my career: for some reason I’ve always been typecast in this kind of role. I have also researched other songs from various styles that I could fit into the theme of psychotherapy and madwomen.

For the past 4 years it’s been a self produced endeavour, aided only by my wonderful director Clare McKenna who helped me to put my crazy ideas into reality. At every new production of the show, I am accompanied by a different talented pianist, who also portrays my psychotherapist in the story, or as I like to call him, my psychothera-pianist. So far, I have performed the show in London, Brighton, Edinburgh and New York. My plan for the future, is to conquer more and more cities, and spread my mad verb all over the world!

I urge everyone to go and see Emily Carding’s one woman show “Hamlet – an experience”, a compelling actress, and an incredible piece of theatre, an interactive take on Shakespeare.
David William Bryan’s “In loyal company” is another show I cannot wait to see, if his social media posts are anything to go by, his script has to be an intriguing and deeply honest piece of writing.
Beloved returning performers are Jo Jo Bellini with her “Agents Provocateurs” and Familie Floz with “Infinita”.

I’m also looking forward to seeing fellow Italian Cecilia Gragnani in her “Diary of an Expat”, which I already saw in London a few months ago and it blew me away for the brilliant and ingenious storytelling. You will laugh to tears throughout, til suddenly you find yourself unexpectedly deeply moved! 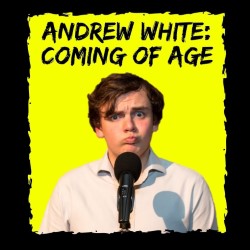 “I had the best time meeting new people, seeing so many shows, and just soaking in the whole experience.”

WHAT: “In 2017, Andrew White debuted his first solo show, It Was Funnier in My Head, unable to legally drink, have debt, or even get into some venues he was set to perform in! But this year, he’s back and ready to do it all again with a new-found sense of adulthood… Now 18, I embark on a brand-new show, exploring what it means to be an adult and the world I am “grown-up” in. Through stand-up, poetry, and even experimental mime, I’ll discuss every aspect of life for a teenager facing the “real world”…”

It’s my third Fringe, and second as a performer.

I absolutely adore the festival, and very quickly fell in love on that first visit in 2016. In fact, it was during that trip that I said to myself that this is where I wanted to be every August.

And next August, I was there with my debut show! It was called ‘It Was Funnier In My Head’, and I couldn’t have asked for a better start to Fringe life. More importantly though, away from any of the shows success, I had the best time meeting new people, seeing so many shows, and just soaking in the whole experience.

I’ve performed a lot more at bigger gigs, and perhaps one of the best things to happen was the chance to perform at the Pavillion Theatre in Bournemouth in front of over 1000 people. A surreal night for my stand-up career, and one I shall treasure for a long time.

Well the answer to all the ‘who’ questions is pretty much myself. It’s quite a lonely world in stand-up comedy, and no matter how many friends you make and people you gig with, at the end of the day, it’s just you on stage with a microphone.

It’s all about growing up and becoming adult, as I turned 18 earlier this year. The show covers all sorts of things, from broad concepts like bigotry and family to more specific experiences like learning to drive and going to parties.

I’ve done several performances already to hone the show, so Edinburgh isn’t exactly is a premier, but it is, in theory, and unveiling of the final polished product!

Whether it goes anywhere beyond the Fringe is up in the air, but I’d love to show it to as many people as possible.

All sorts. I’ll recommend some specific shows below, but just go and see everything and anything. Really awful student improv, a surprise smash hit musical, experimental magic. There’s loads at the Fringe, so try and experience as much variety as you can. Your August will be all the richer for it!

However, to be more specific…