Brooks Hudgins as Prior and Emily Deans as Harper
Photos: EUTC

‘A Gay Fantasia on National Themes’

If you think a log cabin Republican is the kind of guy who would fire off a Patriot missile at a low flying angel, that would be way, way off target. And what would be his (her?) Democrat equivalent? I dunno but it might involve tepees and he / she might major in lines like ‘Respect the delicate ecology of your emotions’. You get both sorts on the Bedlam stage this week. Yay!

This is Tony Kushner’s cultural blockbuster of a play from the early 90s: that’s actually two plays, Millenium Approaches and Perestroika, with a runtime – then – of around seven hours. See this EUTC production, ably directed by Liam Rees, and you’re done in just over three hours but you will probably want to know what has had to be cut. (There is the made-for-cable HBO miniseries that might help and you won’t have to suffer the Baltic temperatures of Bedlam, although the scenes in Antarctica might feel familiar.) In the original script there are 67 scenes for two characters and that’s more or less how it all proceeds, two-handers with stand-out monologues for the principals. It’s sharp, witty, political, and yet manages to shade from the domestic to the mythic. Its subtitle, ‘A Gay Fantasia on National Themes’ sets the scene.

To begin with it is 1985, Cats is going strong on Broadway and Ronald Reagan is President. In New York City Prior Walter – latest of the Walters who got off the Mayflower – is getting sick from AIDS and his partner of four years, Louis Ironson, is not coping. Lou works in the same building as Joe Pitt, a legal clerk, who is offered a big move to Washington DC by his powerful associate and friend, Roy Cohn. Joe does not know if he can take the job because his wife, Harper, is popping Valium like there’s no tomorrow. You are never entirely sure how many tomorrows Prior has left, not least when he’s visited by two ancestors in black capes who regard his pestilential condition as entirely befitting a sodomite.  Angel wings hang above the stage and at the close a tremendous thrumming heralds the arrival of the ‘Messenger’. In all likelihood the bearer of glad tidings has arrived but there have been angelic voices before and Prior, bless him, has no idea what they’re talking about.

The excellent cast does not leave the stage which works well to impress a sense of full-on, marginally dislocated action. Prior’s sick bed stays up centre throughout. Brooks Hudgins plays the stricken WASP with timing that stings and with biting bittersweet delivery. Abandoned by Louis, he muses on his desperate isolation: it’s a sad joke that his dermatologist is on a [long] vacation in Hawaii and his mother … well, his mother just stays away. Rob Younger as Louis has all the lines and tousled angst of a Woody Allen character. It’s a kind, thoughtful part, full of faltering starts, punctuated by ‘Okay ..’ and ‘Right ..’ as he tries to explain himself. At home, stranded in her Brooklyn apartment, Emily Deans is outstanding as Harper Pitt, managing her depressive state with what amounts to mischievous glee in pyjamas and spotted dressing gown. Andrew Hally as husband Joe has to behave decently against demanding odds and more insuperable than even his Mormon upbringing or his sexuality is the foul mouthed, monster ego of Roy Cohn. The fact that Al Pacino took this part gives you a measure of what Peter Morrison has to do and he does well, lurching from one ghastly judgement to the next upon what’s rotten in the land of the free. It is not at all difficult to realise that Cohn (1927-1986) was a real-life horror show. 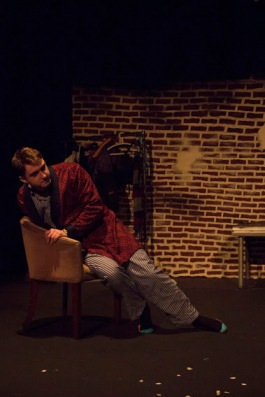 Supporting roles by Meera Munoz Pandya (notably as Belize, onetime drag queen, Prior’s ex-boyfriend and best friend) and by Erica Belton are clearly defined and remarkably effective within the significantly reduced script. The inevitable problem in this half and half version of Angels in America is that the impact of the ‘blockbuster’ cannot be the same as it was when young Americans were all ‘Reagan’s children’. It even predates Friends for heaven’s sake! The angelic chorus gets muffled, as it certainly did up in the rafters of Bedlam. Exhortations to ‘Look up, look up’ did not just baffle Prior Walter. Nevertheless, when ‘Modern Studies’ in many a Scottish high school can still stop at JFK’s assassination and when HIV infection and AIDS simply register as component parts of the Health and Well Being curriculum, this EUTC production is important work.

Go to Angels in America at Bedlam Theatre