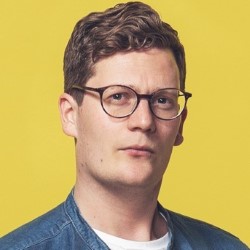 “It’s got a very stupidly long title – something I thought would be funny to see on posters but has really battered my word-count in the brochure. So that’s a lesson learnt.”

WHAT: “Following a sell-out 2018 Fringe and debut UK tour, the ‘utterly hilarious’ **** (BroadwayBaby.com) stand-up returns with a new hour. Robin’s a father to his son. A son to his father. But what makes a good male role model? As seen on BBC Two’s Stand-Up At BBC Wales. Writer for The Mash Report (BBC Two) and The News Quiz (BBC Radio 4). Tour support for Ellie Taylor and Iain Stirling. Warm-up for The Graham Norton Show. **** (Sunday Times).”

I’ve just finished my first tour – I took the show I did at the 2018 festival around the UK which was lovely, being able to give it life after Edinburgh.

But in more important news, my wife is pregnant with our second child, due 10 days after Edinburgh 2019 finishes. Oh boy.

It’s got a very stupidly long title – something I thought would be funny to see on posters but has really battered my word-count in the brochure. So that’s a lesson learnt.

It’s a new hour of stand-up about my Dad, my son, and what makes a good male role model in 2019. I’ve been slowly building it since September last year, and I’m really excited to take it to Edinburgh. I’ve had 5 people walk out so far at the same bit of material, which I find hilarious, because I’ve never been polarising before, and I really think it could be the thing to start off my bad-boy persona.

I think I’ll tour the show in Spring 2020 but perhaps under a title that won’t baffle people.

They should see Comedy In The Dark. It’s mad. Four comics perform their sets in a pitch black room. Visual jokes OBVIOUSLY don’t work but it’s so fun to do. I’m hosting it every day.

But if you’re sick of me, then Sophie Duker and Helen Bauer have their debut shows which will be nothing short of brilliant. Maisie Adam and Olga Koch have been making me cry with laughter when I’ve gigged with them recently so definitely them too.