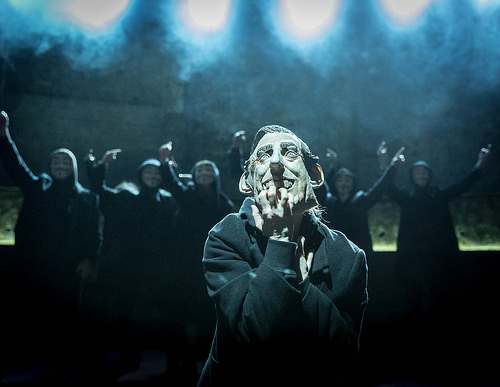 “The best of Shakespeare, bang up to date”

Given how topical this production is, I still can’t quite get my head around why someone hasn’t thought of doing a play like this before. Yes, it’s daring and bound to spark discussion on either side of the Royalist debate, but perhaps that’s what makes it utterly ingenious.

Mike Bartlett’s script really is the star of the show – conceiving an idea both dangerous and compelling, that’s also utterly believable. That’s a mean enough feat for many a playwright, but then consider it is also written in Shakespearean style blank verse (with nods to more of his works than I could keep track of), bang up to date, witty, funny and gripping to the very last stage direction.

It’s cleverly structured to allow for scenes and opinions to unfold between all characters, and pacey enough to keep the action flowing, without ever cheating the audience of any details. I would have preferred more ensemble scenes to break up the endless soliloquies and duologues (again, very Will’), while a more contrasting sense of status between the Royals and others would have gone some way to create even more tension.

The style of the performance took some getting used to early on: interpretations of well-known people seemed over-theatricalised, while showing a distinct lack of respect to each other and occasion. This made it hard to engage with immediately, as I was expecting a subtler and more faithful approach to character. For this reason, for me it was the “made-up” characters of Mr Stevens (Giles Taylor) and Jess (Lucy Phelps) who rang most true, and achieved the optimum balance between the theatrical style of the script and connection with the audience.

In saying that, the very beauty and intelligence of this piece is the subtle level of detachment from presenting something real and expected, to an exploration of imagination and possibility. Once this performance was in full swing, and I could appreciate the characters as part of an intriguing story (as opposed to what I would expect to see in real life), I was all but blown away by its power and craft. Ben Righton’s William was bang on the money in terms of character development throughout, progressing from stable wallflower to dominant leader, while the descent of Charles (Robert Powell) into public ridicule was nothing short of masterful.

If the King could grant me one wish, it would be to fast forward 100 years, when the population know comparatively little of our current royal family, and see how well it is received then. My money would be on it being viewed in the same way we lap up the best of Shakespeare today.

Go to King Charles III at the Festival Theatre