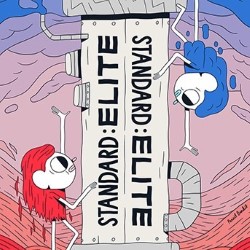 “…for a long time didn’t think we’d ever be able to take something up to the Edinburgh Fringe. It’s always presented as the Holy Grail of industry showcases, but taking a show up takes a lot of time, resources and ultimately – money.”

WHAT: “There are two types of ticket. Everyone gets a Standard ticket. You have to earn an Elite ticket. Together, we’re going to tell a story… of a girl from Lowground spun from spiderweb and a boy from Highground carved from clouds. Standards work to build the story, Elites control which path the story takes. That’s fair, right? Standard:Elite is a playful, interactive theatre experience about class and privilege that’s irreverent, accessible and fun. There are two types of ticket. There aren’t two types of people. ***** (VoiceMag.uk). ***** (TheSpyInTheStalls.co.uk). Winner: Best New Writing (Manchester Fringe), Best Newcomer (Brighton Fringe).”

Yes. We’ve been making work for years, but for a long time didn’t think we’d ever be able to take something up to the Edinburgh Fringe. It’s always presented as the Holy Grail of industry showcases, but taking a show up takes a lot of time, resources and ultimately – money.

However, thanks to the support of a lot of people (particularly Oxford Playhouse, Bedlam Theatre and three productions worth of Theatre Tax Refund) we’re finally able to bring our show about class and social mobility up to the place where all the gatekeepers go…

Standard:Elite has been fortunate enough to win awards at the two other Fringe Festivals we’ve visited – ‘Best New Writing’ at the Greater Manchester Fringe, and ‘Best Newcomer’ at Brighton Fringe.

It’s been amazing to get such a positive response to the show and meet lots of different types of audiences around the country. Now it’s time to tackle the Scots.

We’ve also been working on our new show ‘Drawing the Line’, which was the flagship commission of The Albany’s ‘Rebels’ season and had us creating entirely new nations from scratch with audiences in Deptford.

Hidden Track is a company created by Director Anoushka Bonwick and Writer Elliot Hughes, out of a desire to create playful, political work which challenges narratives, champions the vulnerable, and rewrites the rules of theatre.

They both met at the University of East Anglia, and then graduated University to find themselves unemployed. Anoushka spent ten months handing out flyers for other businesses while she searched for work, while Elliot was sent by the Job Centre to an employment workshop where he was told to take his degree in Scriptwriting and Performance off his CV as it made him ‘unemployable’.

Standard:Elite was first performed in the room above a pub in Manchester for Chorlton Arts Festival, with a total budget of £500. It then received really positive responses, and slowly grew bigger and bigger as it begin to win awards, receive funding, tour around England, and expand its creative team. As well as bringing on incredibly talented designers and artists, they were also joined by Producer Beccy Smith, who has now been with the company for over two years.

Standard:Elite is an interactive show about class and social mobility that splits its audience into ‘Standard’ and ‘Elite’ audience members on the roll of a dice. Elites receive special treatment – getting comfier seats, free cake, and the chance to vote to change the outcome of the show’s story. Standards work to help tell the story – playing games, shouting things out, serving the aforementioned cakes… and the Standards who win those games get to become Elites themselves.

The show is an anarchic, irreverent take on the subject which plays fast and loose with the rules of theatre, but always focuses on our audience just having a great time. All audience participation is voluntary, and you’ll never be asked to do anything you don’t want to do. You can start your own class war, smuggle illicit goods across borders, shout ‘Objection!’ in court, or just sit unharassed and watch the story unfold.

It’s mainly a good laugh that doesn’t take itself too seriously, but it also contains an important message about the myths of social mobility and hardships of class discrimination.

You also get to throw things. And there’s a giant duck.

There’s so much to go and see!

In particular, first, a shout-out to our fellow shows supported by the Oxford Playhouse – Kuumba Nia Arts’ ‘Sold’ and Doug Crossley’s ‘Give Me One Moment In Time’ (both showing at the Pleasance).

And we also can’t wait to see John Robertson’s live-action video game ‘The Dark Room’ at the Gilded Balloon.