“I must confess, military history bores me.”

WHAT: “”Roma” is the story of the ancient city of Rome, from its mythic beginnings as a campsite along a trade route to its emergence as the centre of the most extensive, powerful empire in the ancient world. Beginning with the prehistory days when Roma was a way station among seven hills for traders and merchants and the founding of the city itself by Romulus and Remus, critically acclaimed historical novelist Steven Saylor tells the epic saga of a city and its people, its rise to prominence among the city-states of the area, and, ultimately, dominance over the entire ancient Western world. From the tragedy of Coriolanus, to the Punic Wars and the invasion by Hannibal, the triumph and murder of Julius Caesar, and the rise and decline of the Roman Republic and the beginnings of Imperial Rome, Saylor’s breathtaking novel brings to vivid life the most famous city of the ancient world. “Roma” is Saylor’s finest achievement, an epic in the truest sense of the word.

In the international bestseller “Roma“, Steven Saylor told the story of the first thousand years of Rome by following the descendants of a single bloodline. Now, in “Empire”, Saylor charts the destinies of five more generations of the Pinarius family, from the reign of the first emperor, Augustus, to the glorious height of Rome’s empire under Hadrian. Through the eyes of the Pinarii, we witness the machinations of Tiberius, the madness of Caligula, the cruel escapades of Nero, and the chaos of the Year of Four Emperors in 69 A.D. The deadly paranoia of Domitian is followed by the Golden Age of Trajan and Hadrianobut even the most enlightened emperors wield the power to inflict death and destruction on a whim. “Empire” is strewn with spectacular scenes, including the Great Fire of 64 A.D. that ravaged the city, Nero’s terrifying persecution of the Christians, and the mind-blowing opening games of the Colosseum. But at the novel’s heart are the wrenching choices and seductive temptations faced by each new generation of the Pinarii. One unwittingly becomes the sexual plaything of the notorious Messalina. One enters into a clandestine affair with a Vestal virgin. One falls under the charismatic spell of Nero, while another is drawn into the strange new cult of those who deny the gods and call themselves Christians. However diverse their destinies and desires, all the Pinarii are united by one thing: the mysterious golden talisman called the fascinum handed down from a time before Rome existed. As it passes from generation to generation, the fascinum seems to exercise a power not only over those who wear it, but over the very fate of the empire.”

WHO: Steven Saylor is an American author of historical novels. He is a graduate of the University of Texas at Austin, where he studied history and classics.

Saylor’s best-known work is his ‘Roma Sub Rosa’ historical mystery series, set in ancient Rome. The novels’ hero is a detective named Gordianus the Finder, active during the time of Sulla, Cicero, Julius Caesar, and Cleopatra. Outside this crime novel series, Saylor has also written two epic-length historical novels about the city of Rome, ‘Roma‘ and ‘Empire’. His work has been published in 21 languages..

The late Nick Robinson was one of the last independent publishers of the old school. He founded Robinson Books in the 1980s (which later bought Constable and then was bought by Little, Brown/Hachette). Once he brought me to London on book tour and invited me to his Mayfair flat, where I had been told by my breathless editor, “Nick has an exciting proposal for you!” Over cocktails, he said, “Steven, we’ve done quite well with your Roman mystery series, but I think it’s time for you to step it up a notch. I want you to write…a big book.” And that was it. A big book! But that no-frills invitation did call to mind an idea I’d been mulling for a while, namely one of those epic family sagas where a place is the title and also the main character, like James Michener’s Texas or Edward Rutherfurd’s London. No one had done that with Rome. Nick and also my US publisher said, “Do it!”, so I was off.

I first thought I could pack everything from Romulus and Remus to Fellini in a single volume, but there’s just too much Roman history and too many great stories. So for Roma I settled on the first thousand years, from Iron Age trading post to burgeoning world capitol under Julius Caesar. The sequel, Empire, bit off a shorter time period, because I had to fit in all those crazy emperors between Augustus and Hadrian, which brought us to the very height of Rome’s empire.

Your narratives take place entirely within the locale of the 7 hills. How easy was it to run and rerun the course of honour without recourse to a military career or three?

My first rule was that Rome would be not just the main location of the novel, but the only location. We never leave Rome. All the battles take place off-stage, as they do in a Greek drama.

I must confess, military history bores me. My friend Lindsay Powell writes biography of Roman generals and he can cite every detail about every legion and its insignia and so forth over dinner, bless him, but I start fiddling with my napkin and daydreaming about sex and politics. It’s the sex and politics that grab me, and you never have to leave Rome to find that.

But the books do have plenty of blood and gore—riots in the Forum, gladiator games, Nero burning Christians. My US editor had me trim a few passages from Empire for fear the reader would experience what he called “cruelty overload.” The Romans had an enormous appetite for violence. As do we, only ours is mostly indulged in movies and TV and sports, where people don’t actually die.

Central to each narrative is an amulet. When and where did you first encounter that device?

The great T.P. Wiseman in ‘Remus: A Roman Myth‘ postulates that a reported sighting of a phallus floating in a hearthfire may be the first purely Roman myth. That eerie phallus was a god named Fascinus. Little replicas of Fascinus became everyday talismans, each called a fascinum. The Vestal virgins, ironically, were in charge of a big fascinum, which they had the sacred duty to load out of sight under the chariot of a triumphing general, where it protected him from the Evil Eye of the envious. Mothers would likewise put a fascinum in baby’s cradle, to ward off the envious gaze of barren women. The absolutely primal nature of this religious idea was something I wanted to include at the very start of the saga, and have it endure all the way up to the dawn of Christianity, when Constantine decides that all amulets should be outlawed.

Can we expect a third volume without recourse to the arm twisting and threats of violence that compelled Conan Doyle to resurrect Sherlock Holmes?

Yes! The third novel will be out in 2021. It follows my fictional family from Marcus Aurelius, the Stoic emperor, to Constantine the Great, the first Christian emperor. It’s a critical period of world history, as paganism dies and the Christians triumph.

Along the way we meet Elagabalus, the drag-queen emperor (not around long), Zenobia of Palmyra, a real queen who challenged Rome, and many other little-known but fascinating figures including (you can’t make this up) a certain Senator Messius Extricatus.

The third volume has taken so long to write because the research was endless, and arduous. Also, as I’ve gotten older, I’ve begun to savour what I call “slow writing.” Rather like slow cooking. It will taste even better when it’s finally done.

Was Gibbon right about life under the Antonines being as good as it gets, or would you opt to live elsewhen in your story arc?

Gibbon got that idea from an ancient author named Aelius Aristides, who wrote a long oration praising the Roman empire of his time. If you had money and citizenship, life under the Antonines could be mighty sweet. If you were a slave in the mines, not so good. Every era can be the best or worst of times, depending on your circumstances. But overall, yes, to be young and healthy and reasonably wealthy in the time of Hadrian would offer about the best chance of happiness in the history of ancient Rome. They had peace and prosperity and a vibrant literary scene. Authors could do quite well.

Other than the amulet, what’s the one item you’d want to personally own from the stories?

I’d love to lay hands on an item from the forthcoming third volume: the scepter of the emperor Maxentius, a gilded staff topped by a glass ball, which was discovered in Rome only a few years ago. Archaeologists think it was hidden by his supporters on the very day of the battle of the Milvian Bridge, when Maxentius drowned in the Tiber and Constantine rode into Rome as a conqueror. That was a decisive moment in world history. That scepter is a one-of-a kind symbol of lost causes. If any pagan magic survives from ancient Rome, it would be in the scepter of Maxentius. 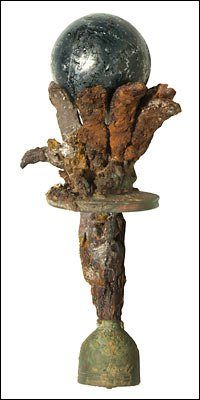 When you aren’t writing about Rome and the Romans, which other authors are you reading?

Lately I’ve been reading everything by Deryn Lake (who also writes as Dinah Lampitt). Her ‘Sutton Place Trilogy‘ is a remarkable feat of historical fiction, with just a touch of the supernatural. I just finished reading her latest, a ripping yarn about Bonnie Prince Charlie called ‘The Prince’s Women‘.

Who’s the one historical character you wish you could have included who didn’t make the final cut?

Not a historical character, but a fictional one: I’d love to have slipped a sly cameo into the last chapter of Roma for my sleuth of ancient Rome, Gordianus, who has 16 books of his own. But ultimately it just didn’t feel right to include a nudge and wink of that sort in Roma. The two series—Gordianus on one hand, the family saga on the other—are completely separate in my mind. It’s almost as if they take place in two different universes, both called ancient Rome.

You’ve got a solo return ticket for either a year on campaign with Julius Caesar; a fortnight with Hadrian and his entourage at Tivoli; or a day in the Library of Alexandria. Which do you choose?

I would eschew the chance to experience the endless horrors of Julius Caesar’s military campaigns—too many war crimes. A day at the Library of Alexandria would be much too short a stay, unless I could check out a boatload of books and bring them back with me. (Would I have to pay the overdue fines?) So I choose to hang with Hadrian and his circle for two glorious weeks. Talk about living like the 1%! The libraries, the art galleries, the fine dining, seeing Suetonius read from his Caligula bio and then take Q&A, Hadrian getting drunk and babbling on and on about his lost love, Antinous—well, maybe not that last part. We could put Hadrian to bed early, and then have a really good orgy.