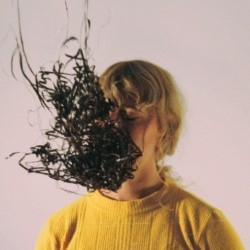 “I lost my front tooth! If you come to the show, please humour me by saying you can’t notice the fake.”

WHAT: “Following her grandmother’s death, a girl faces the overwhelming task of clearing out the basement. She discovers a series of mysterious tapes with recordings made by her grandmother. As she hears these tapes for the first time, things start to unravel… Twin Peaks meets Serial in this award-winning New Zealand mystery, set and performed literally in a basement. Inspired by podcasts and Robert Lepage’s comment that radio is the most visual medium. ****1/2 (Age). ****1/2 (Sydney Morning Herald). ‘Totally engaging. A must-see production’ (Stuff.co.nz). ‘Eerie, thrilling and totally engrossing’ (TheatreView.org.nz).”

I went to Edinburgh as an audience member in 2012. I found it very overwhelming, and had no idea what to choose to see, but looking back that may have been because of the impending sense the world was going to end. It didn’t, thankfully. Which is why I’m here again six years later.

After performing The Basement Tapes in Melbourne Fringe in 2017 I ended up in hospital with a jaw infection. I lost my front tooth! If you come to the show, please humour me by saying you can’t notice the fake. Oh, and The Basement Tapes’ director Jane Yonge got married to her longtime high school sweetheart Robin, which I think is just as equally important and life changing.

The Basement Tapes fire was ignited when a tape recorder was found while cleaning up my Grandmother’s house when she died. This artefact was its own little mystery (Why did she have this? Why in the basement? What did she record?) but something about this obsolete technology inspired me in a Lynchian, Buñuel fashion. Bringing together three other devisors, including director Jane Yonge (married), sound designer Thomas Lambert (of NZ’s Sonorous Circle) and set designer Oliver Morse (who built his own house!), we wrote the story that is The Basement Tapes together over one year. We are lucky to now be joined by producer Lydia Zanetti, from Zanetti Productions, as we bring our show halfway across the world for the first time.

Given the vibe of place I’ve got so far, I’d advise they stay at Summerhall and see Extinguished Things (as soon as we are over!), Sam Snedden’s livestream Running, Valerie by Last Tapes, and finish the night (or really begin?) by listening to the audio tour Happy Hour by Binge Culture.