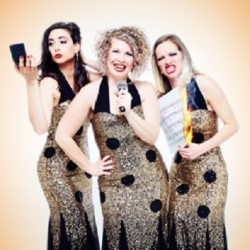 “We have had so many ideas that we have been going a little overboard!”

WHO: Nerine Skinner: Performer and co-creator

WHAT: “Slick and sophisticated cabaret trio. Well, they were ’til the soprano stormed out. And the mezzo died. Remaining Dot Helen (up Dot creek without a dotting paddle) frantically finds emergency understudies. Watch as this new ensemble launch into an under-rehearsed whirlwind of quavering fear, major malfunctions and minor injuries as Helen desperately tries to uphold the bar of her beloved trio without a minims rest. Will they strike the right chord? Will they B flat? Can Helen stave the day? Join The Dots for music, mayhem and a cataclysmic crescendo! For-tis-si-mo-ment!”

I have been to Edinburgh with my own shows created by myself and comedy partner Lizzie Franks. We have taken two shows up there including ‘Myself and Myself’ and ‘Mindfulmess’ with our comedy duo ‘Franks and Skinner’. We had a great time up there and received 4 and 5 star reviews.

I have also been up to Edinburgh with another company called ‘Interactive Theatre International’ performing in an interactive, immersive theatre dining experience called ‘Confetti and Chaos’ (formerly ‘The Wedding Reception’), which both myself and my new comedy partner, Helen, will also be performing in this year alongside our brand new show ‘The Dots’.

This year, the biggest thing to have happened to me is meeting my new comedy partner Helen Colby. We have entered into a new realm of creation! We met at panto in Salisbury while performing in ‘Beauty and The Beast’. Helen played Spite, the evil witch, while I played Souffle, an Instagram obsessed nightmare!!

We immediately connected and decided to create something different that would work on a universal level and ever since we have had so many ideas that we have been going a little overboard!

Helen Colby formed ‘The Dots’ back in 2017 after a glittering career in London’s West End. She had performed in many shows including ‘Sweeney Todd’, ‘Sister Act’ and Charlie and The Chocolate Factory’ to name but a few and decided she wanted to put her focus into creating a slick, professional 3 part harmony group that would not only sound and look fantastic but would also provide a twist to the usual groups circulating in the industry. The group has been working regularly with very talented performers and the gigs have been flowing in.

When Helen and I met, I had come from a different background in performance. I have worked heavily in devising projects and writing and performing my own stand up sets as well as working within my already formed comedy duo ‘Franks and Skinner’. When Helen told me what she was looking to achieve with ‘The Dots’ long term, I knew we could work together to make this happen. We decided to bring a new edge to the the group that would involve a comedy arc that would bring all these elements together.

We started playing about with ideas in the room with our wonderful third Dot, Macey and soon ideas and concepts for a full show came to light and we decided to premiere this new mix of comedy, cabaret and dance in Edinburgh this year!

Post Edinburgh we hope to tour this and take it onto cruises as well as look at it on a television level as we feel it has legs to go further. We already have Christmas bookings in Theatres so we have a busy year ahead!

We would highly recommend our audience to see ‘Confetti and Chaos’ as both Helen and I are also in that show! The company producing ‘Confetti and Chaos’ also produce the ‘Faulty Towers Dining Show’ which I will also be performing it in Edinburgh! The Imagination Workshop Festival Hub has many different shows on this year at the fringe including a fabulous show called ‘Love/Hate Actually’ and ‘Only Fools and Horses, The Cushty Dining Experience’ among many others so it is a great venue to check out while up there… and good news… they are all in the same venue at The Principal Hotel, so make a day or evening.. or week of it!