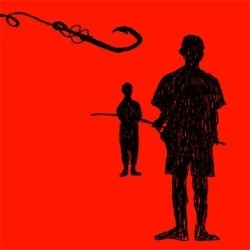 “One of the major things that has happened to us is the increased international demand for our work.”

WHAT: “In a small Nigerian town Ben, Obembe and their two older brothers slip away to fish at a forbidden river. Unnoticed and carefree they continue until the prophecy of a madman changes their lives forever. Based on the Man Booker Prize shortlisted novel by one of Africa’s major new voices, New Perspectives’ critically acclaimed award-winning production of Chigozie Obioma’s powerful allegory of brotherhood, vengeance and fate adapted by Gbolahan Obisesan, returns to the Fringe for six performances only. ‘Something very special’ (Guardian). ‘A supreme piece of theatre’ (Stage). Part of the British Council Edinburgh Showcase 2019.”

We have been to the Edinburgh Fringe Festival many times, most recently in 2017 and 2018. In 2013 we brought The Boss of It All, a world premiere adaptation of the film of the same name by Lars Von Trier. Adapted and directed by our Artistic Director Jack McNamara, this was also a British theatre debut of an adaptation of Lars Von Trier’s work. We followed in 2017 with two productions: The Giant Jam Sandwich adapted and directed by Jack McNamara, and Finding Nana by Jane Upton directed by Katie Posner. In 2018 we returned with two contrasting productions: A Fortunate Man, which is a stage exploration of John Berger’s book by Michael Pinchbeck and The Fishermen, adapted by Gbolahan Obisesan and directed by Jack McNamara. 2018 was a great Edinburgh year for us with both A Fortunate Man and The Fishermen selling out their month-long runs.

One of the major things that has happened to us is the increased international demand for our work. Since last year we have taken A Fortunate Man to Singapore (M1 Festival) and Cologne Festival and have plans afoot to take work to Sarajevo next year. The Fisherman has also just secured a West End Transfer and will run at Trafalgar Studios Sept 3 – Oct 12.

The Fishermen is a first stage adaptation of the Man Booker shortlisted novel by Nigerian author Chigozie Obioma. It was adapted by Fringe First-winning playwright Gbolahan Obisesan and directed by our Artistic Director, Jack McNamara. It premiered at Home Manchester where it played to sell-out audiences before heading to Edinburgh and then touring. It was performed by two brilliant young British-Nigerian actors, Michael Ajao and Valentine Olukoga, who together won a Stage Award for outstanding performances. We are thrilled that it will have an opportunity to return to Edinburgh under the British Council Showcase, then transfer to the West End and then onto the Marlow Theatre in Canterbury.

Of the established artists we are big fans of Tim Crouch’s work so would certainly recommend Total Immediate Terrestrial Salvation. We are also excited to see Vessel by Sue Maclaine; another theatrical adventurer whose work we admire. Other shows to look out for are Y.O.U by Fuelled Dance Theatre and To Move in Time by Tim Etchells. But mainly Edinburgh is about taking a punt and discovering something unexpected, bizarre and extraordinary. So for all the known and acclaimed shows we also always recommend people diving into the unknown at least once a day. Spend some time in a cellar, check out the Free Fringe, get up early morning and see a children’s show. Many of our best Fringe experiences have come from going off-piste.