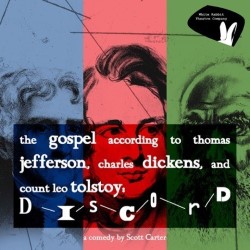 “We started working on it at around Christmas time 2018. We did previews in both January and March, with various production meetings in between, intensive rehearsals in July and will soon be packing up to head to the UK for August.”

WHAT: “Thomas Jefferson, Charles Dickens and Count Leo Tolstoy find themselves locked in a room with no exit, as they ransack the philosophies of their lives and work, searching for a truth – why us? And why, in God’s name, together?! At once uproarious, raw and painfully honest, Discord unveils the many virtues and vices of these towering icons and discovers a universal truth: no human is human without flaws.”

As a company – yes. This is the company’s second-ever production and our first time abroad (we’re based in Switzerland). However, both myself and one of our actors, Ciaran, have had previous Fringe experience during our respective university years.

In the past year the biggest thing has honestly been this project. Our last production rehearsed for two months and then performed for a week. But this one has been much bigger. We started working on it at around Christmas time 2018. We did previews in both January and March, with various production meetings in between, intensive rehearsals in July and will soon be packing up to head to the UK for August. After which we will return to Switzerland, have a few more production meetings, and maybe some pick-up rehearsals, before a FINAL Swiss run in October. It’s been a MASSIVE undertaking and definitely the biggest thing to happen to me personally, and certainly the company, in a long while.

The show with the massive name – “Discord” for short – was written by Scott Carter (writer and producer of American TV show “Real Time with Bill Maher”). The show is being produced by White Rabbit Theatre Company, a small, independent company founded in Zurich, Switzerland.

To be honest, the company initially came together because I wanted to see if I could produce a play on my own, and also to test out the idea of a Profit-Sharing theatre company. So in 2018, I organized a cast and director for The Importance of Being Earnest. The company produced the play in October of that year and it worked out so well that I thought, “Hey, this could actually work!”. Most people, at that point, would say, “Great, now to establish a base I will do the same thing and follow the same formula again, to have another successful show.” But not me. Nope. I thought, “Great, now how can I make this bigger!!”

“Discord” has been done (not by us), several times in the US, including a run in New York City, but made it’s European debut when we staged a Public Reading in January 2019, followed by a Rehearsed Reading Fundraiser in March. The run at the Fringe will be the UK debut of the show, and we will do a final run back in Switzerland in October of this year. (And then we’ll have a BIG party to celebrate a very long, very hard – but very fun – year).

Definitely check out our other “rabbit” friends Dead Rabbits and their show “My Love Lies Frozen in the Ice” and Rabbit’s Head Theatre Company’s show “The Kiss”.

Absolutely go see Dickens for Dinner, and if you can, Eddie Izzard in “The Expectations of Great Expectations”