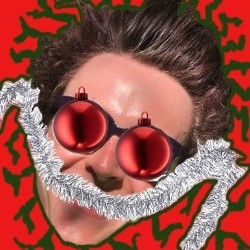 “I’ll be telling the story of my Christmas Fundamentalist upbringing through the medium of character comedy.”

WHAT: “Richard Duffy has been celebrating Christmas every day since the day he was born. Come witness his mental breakdown… live! One third of critically acclaimed sketch group Planet Caramel goes rogue to tell the story of how he escaped his Christmas fundamentalist upbringing. Expect lots of jokes about Christmas, Christmas themed characters and interactive Christmas experiences. Praise for Planet Caramel: ‘Bright and witty… fast-paced, energetic and wonderfully silly’ ***** (EdFringeReview.com). ‘Glimmers of comedy genius… genuinely new and presciently funny’ (ThreeWeeks).”

WHERE: Champions of Festival @ The Scotsman – Drawing Room (Venue 445)

I’ve come out as a Christmas Fundamentalist, which means I celebrate Christmas every day. My friends and family have been really supportive which is why I felt compelled to bring this show to the Fringe this year.

The organisation plans to recruit between 400,000 and and 450,000 new Christmas Fundamentalists during the festival then I will be embarking upon a 5 year long world tour of 365 cities with the aim of recruiting the remaining world population.

Although my show is the Official Edinburgh Fringe Christmas Show, there are other shows this year which seem to feature Christmas quite heavily. I can recommend Sleeping Trees: Christmas Special… in August as well as The Hollywood Summer Christmas Show. Jared Christmas: A Funny Hour does seem like it should be about Christmas but I think this might be some false advertising. I can confirm he is a very good non-Christmas stand-up though!