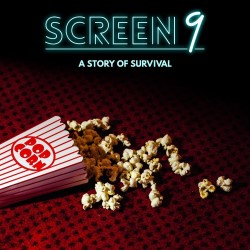 “Some of our company have been to the Fringe as performers for different productions, punters, industry members and others have never been—so it’s wonderful to go up as a collective.”

WHAT: “At the Colorado premiere of The Dark Knight Rises, a community was torn apart by gun violence. But while their hearts were broken, their community was not. This hard-hitting verbatim piece follows the survivors remarkable true testimonies of the infamous Batman Shootings as they attempt to respond and recover from the tragedy. This is their story and every word is real. Piccolo Theatre is a bold new company, creating cutting edge and thought-provoking theatre. The Pleasance is proud to present Screen 9 as this year’s recipient of the Charlie Hartill Theatre Reserve.”

This is Piccolo Theatre’s debut professional show. We’re so excited to bring this show to the Edinburgh Fringe Festival; as a new, transatlantic theatre company we can’t wait to bring Screen 9 to the varied festival audience. Some of our company have been to the Fringe as performers for different productions, punters, industry members and others have never been—so it’s wonderful to go up as a collective. This show was supposed to tour in 2020, so after a year in pause (and more time in R&D and rehearsals), we are thrilled to present it to the public after our previews at the Kings Head Theatre and Durham Fringe Festival. Edinburgh in August is an incredibly eclectic, artistic and inspiring place to be—we can’t wait to be part of its story this year.

This show has grown substantially from the first 10-minute sharing we did at The Pleasance in February 2020. We are partnered with Survivors Empowered, a charity set up by the parents of Jessica Ghawi, a young woman killed in the shooting. Working and supporting the incredible work they do with survivors of gun violence across the county is truly remarkable. They have been a source of wisdom, inspiration and encouragement for the project—and their level of generosity has been amazing. I guess, on a micro-level, we have also learnt how to cope as a company through an international pandemic, including how to run an entire rehearsal week on Zoom (having been pinged by the NHS app!). Since 2019, we have learnt a lot about reclaiming stories and spaces, and we feel very privileged as an ensemble to tell their story, rather than giving fame to serial or spree killers, as is too often done in theatres and media.

It’s a verbatim show about the infamous Colorado Batman shootings in 2012, with every line being resourced from blog posts, trial coverage, and speaking to survivors, parents, and American citizens. The play creates four fictional characters based off real people to tell the survivors’ story, who find themselves in a world where the media focuses on the perpetrator and on the new shooting, often leaving the victims behind. It’s a powerful true story of survival and about finding joy, hope and community. It’s our debut show as a company, and after two preview runs, it’ll be premiering this August in Edinburgh. The dream would be to continue sharing this story next year to mark the 10-year anniversary of the tragedy, and to take it to more venues and an international audience.

Absolutely get your tickets to Patricia Gets Ready (With A Man Who Used To Hit Her). It’s the other Charlie Hartill Award show and carries a very human and important message. It’s definitely going to be a hit! For something lighter than Screen 9 and Patricia, I’d say Austentatious! It’s a really fun Jane Austen improv show that only gets better year after year!