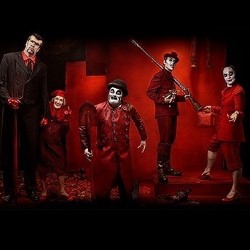 “I have seen some amazing performances in Edinburgh over the years as well as some shows that make me question why they thought that was a good use of their time and effort.”

WHAT: “They’re back! After years away touring the world, the Olivier Award-winning godfathers of alternative cabaret celebrate their 30th anniversary with a triumphant return to the Fringe. Based on the seminal 18th-century Beggar’s Opera, the band present a new song cycle swarming with highwaymen, thieves, jailers, pimps and prostitutes – a world of greed, crime, poverty and inequality. Expect immense beauty and outrageous comedy from the Grammy-nominated, street-opera trio. ‘The execution is impeccable throughout. Phenomenal’ ***** (Guardian). ‘Extraordinary, seek out a ticket for this glorious show’ ***** (Scotsman).”

It’s not our first time, we first played in Edinburgh in 1995 when we we asked to perform with The Men Who Know. We may have misbehaved during the show and gone off script a few times. Soz. A great festival has a diverse mix of the sublime and the ridiculous, lots of people trying new ideas and experienced performers all trying to make as memorable experience for an audience. I have seen some amazing performances in Edinburgh over the years as well as some shows that make me question why they thought that was a good use of their time and effort. I love going into a room and coming out after seeing the world differently. Most audiences never see the effort that goes in day after day, the late nights and the endurance that you need to do a good show every day.

Be flexible and expect the unexpected are some of the sessions we have learned. Apart from that, if you don’t work for 2 years, get a hobby.

One Penny Opera is based on Joh Gay’s Beggars Opera from 1728, it’s also the basis of The Three Penny Opera by Brecht and Weill. The story satirised politics, poverty and injustice, focusing on the theme of corruption at all levels of society. We are playing it as a song cycle, using songs from the album we put out last year, and including some songs from previous albums as well. Martyn has written songs that take the characters into the work of the Tiger Lillies, there is some very poignant songs and some very funny ones as well. We developed the show ourselves over a number of years, the first time in 2001, then we reworked the songs in 2020 and performed it at the Soho Theatre and Wiltons Music Hall. Hopefully we can play it in Berlin later in the year.

I always try and watch Simon Munnery at the Fringe, his shows are great, thought provoking and very funny. He is at the The Strand.

Becky Fury is at PHB’s Free Fringe with her show C*NT!, she is a great performer and poet. Prepare to be offended.

Camile O’Sullivan is playing in the same venue as us and doing a stripped down show with just piano.

Alok at the Traverse Theatre will be excellent, they are currently at Soho theatre now.