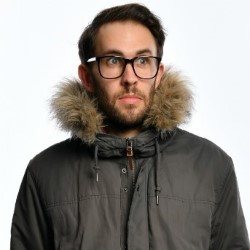 “…this hour has been pretty all-consuming and it’s certainly the hardest I’ve worked on something since I built a shed for my A-level art exam (it was a very conceptual piece).”

Yes and no (mainly no). I first came to the Fringe in 2013 sharing an hour of stand-up with some friends (including Fern Brady and Glenn Moore who I believe are still knocking about). Then I wrote and performed two one-man murder mysteries in 2016 and 2017 which were a lot of fun and something I’d definitely like to do again. This year is my first time bringing up an hour of stand-up so, although I’ve got a few Edinburghs under my belt, I still have the first-time nerves!

I have written a show! That sounds insincere but putting together this hour has been pretty all-consuming and it’s certainly the hardest I’ve worked on something since I built a shed for my A-level art exam (it was a very conceptual piece). I also got to perform stand-up internationally for the first time. I went to Bucharest in November and discovered they don’t play golf in Romania so that routine fell very flat. It’s all a learning curve.

My show is a collection of jokes and songs with a bit of silliness thrown in. There are no great themes or an overarching story I just want people to come and laugh for an hour. It’s all material I’ve honed at comedy clubs up and down the country as part of my job (stand-up comedian) so I’d like to think the jokes are good otherwise I would be out of work. Feel-good is the keyword in the title. I want people to leave feeling good.

Jen Brister and Lou Sanders delivered my two favourite stand-up shows at last year’s Festival and they’re both back with new hours this year so I’ll definitely be checking them out and I would recommend others to do the same. They’re both at Monkey Barrel which has loads of great stuff going on, deffo checkout everything they have to offer.

Another favourite from last year was The Ladder, a very funny theatrical two-hander from husband and wife Rob Rouse and Helen Rutter. They’re back again this year with Funny in Real Life which looks at the effect confessional comedy can have on a relationship. It’s a great concept and I can’t wait to see it!