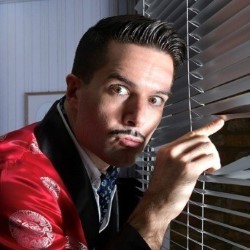 “Perth Fringe is a lot more laid back but tremendous fun and the Aussie crowds are fantastic. Plus you get to go to the beach and see kangaroos.”

No! This will be my fifth show as ‘Troy Hawke!’ I’ve been up to the fringe for about eight runs total. It’s a brilliant way to progress as a comic, both in the performing and writing each new show demands.

I performed in Australia for the first time earlier this year at Perth Fringe World and got nominated for the main comedy award there which was very exciting. Perth Fringe is a lot more laid back but tremendous fun and the Aussie crowds are fantastic. Plus you get to go to the beach and see kangaroos. The one area Perth fringe really puts Edinburgh to shame is the artists bar, ‘The Budgie Smuggler’. Huge outdoor turfed up the venue with a large stage and regular impromptu performances/dance-offs/karaoke/jelly wrestling and very cheap drinks.

I wrote the show, it’s being directed by Paul Byrne (who has had his hand in many successful nominated fringe shows in the past). Other than work in progress performances, it’ll be having its premiere in Edinburgh. I’ve literally just finished touring my last show (I’m actually typing this in the Soho Theatre dressing room just before its final ever performance). After Edinburgh I’ll be touring this one and doing a couple of the Australian festivals with it too.