“We’re off on an adventure, a quest for identity, full of catchy songs and crazy characters.”

“I want my girls to see really accomplished tap dancing, there’s no chance they’re seeing that at home, but if we took them to an exhibition of tap dancing it would be boring as…” “I know what you mean. You want them to see something organic and free-range.” I like the barstaff at Bedfringe. They get it. Really great theatre for children should showcase music, movement, composition, and maybe even have a moral message to scaffold and shape their spiritual and moral growth. What matters is the premise. The toughest audiences in the world need a hook that works from the outset.

‘Where The Lost Socks Go’ has a brilliant premise. It’s one instantly familiar to the wide-eyed little ones, their carers and parents. An African grandma at the schoolgates observed to me last week that socks tend to be rather dull sub-Sahara while every other garment is louder than a cajon percussion box, played upbeat in an auld skool public library. Conversely, British socks are deafeningly loud and proud while everything else in the average English ensemble is limited to the colours of the Ford Model-T pre-sales catalogue.

We enter to find an electric rainbow of socks bestrewed around the stage, hanging from a washing line, covering the feet of the two performers – Beth Markey and Josh Baldwin – only… hang on… wait a minute… Josh is missing a sock. He’s got a big audition coming up, it’s his chance to join the band. Except he’d have to conform to their unshakable ‘No Ukeleles’ rule, something that he’s not feeling too good about.

Josh has one of his guitar socks on, but where’s the other? He might also have to wear mismatched socks, that can’t be a good thing, right? We’re off on an adventure, a quest for identity, full of catchy songs and crazy characters. There’s a rocket ride, dance numbers, and several sockdraws worth of laughs. Once upon a time I was on the parents’ jury that summarily convicted and burned at the stake a disgusting heretic who had openly described Justin Fletcher’s Mr Tumble as a drama school project gone too far – they tried to recant as they were dragged through the street on a hurdle, but the baying mob of cosplaying Aunt Pollys and Lord Tumbles were having none of it.

As I said in the jury room after we voted for conviction, I like drama and music school alumni taking centre stage in the world of pure imagination. There’s a very great deal of finely honed craft needed to capture and keep the attention of the screentime generation. Under The Bed Theatre’s Beth Markey and Josh Baldwin have these skills and then some. They also have the talent to deploy their box of tricks to best advantage. My 7yr and 4yr auld loved every minute. Sock-stealing aliens! What’s not to love? 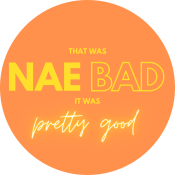