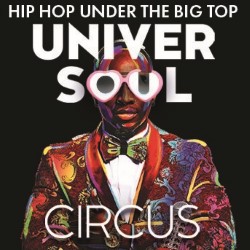 “You’re going to be riding the clouds after seeing our show.”

WHAT: “After electrifying US audiences for 25 years, America’s ‘coolest show on earth’ (Newsweek) comes to the UK for the first time. It’s Hip-Hop Under the Big Top, combining edge-of-your-seat performances, stunning spectacle, hilarious audience participation and a soundtrack that will blow the roof off the tent. UniverSoul’s international cast includes high-wire artists, slapstick comedy, jaw-dropping contortionists, Caribbean limbo fire-dancers and global internet sensations Fresh The Clowns. Come see the show that has entertained over 20 million people in the USA.”

WHERE: Underbelly’s Circus Hub on the Meadows – The Lafayette (Venue 360)

Yes. We’re extremely excited to be coming to Edinburgh for the first time. Not only is this our first time in Edinburgh, this is our first time playing Europe! We are very excited about sharing the UniverSoooul experience with a new audience, on new stage.

This has been an amazing journey that started 25 years ago when I wanted to create a multi-generational show that would bring people together of various backgrounds, cultures, and ethnicities. Since its inception 25 years ago, we have produced more than 12,000 shows for an audience of more than 20 million people. Our team includes myself, the founder, creator, and producer, along with creative director and a show producer Deneise Howard. Production consultants include British creative film producer, John Watkins, Tom Marzullo, who has created amazing live shows for such greats as Justin Bieber, Kiss, and Prince, and famed set designer, David “Gurn” Kaninski. Following our Edinburgh engagement, we will head back to the States for the continuation of our 25th Anniversary Tour.

Well, the UniverSoul Circus is very thrilling and uplifting. You’re going to be riding the clouds after seeing our show. With all the excitement and audience interaction, we hope you will want to see other uplifting performances. There’s some other great circus shows happening as part of Underbelly’s Circus Hub programme – our Canadian cousins Cirque Alfonse are bringing their show Tabarnak which I am excited to see. Circa are always amazing and they have a family show this year called Wolfgang too, alongside our Colombian friends with the amazing Circolombia! Otherwise, I hear there’s some great music at the International Festival and Fringe – which I’m really excited to check out. I’m sure people will find a lot of fantastic shows just from wandering around the city at such an amazing time!