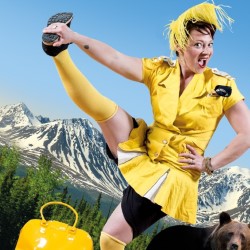 “Marie Kondo’d my life and now can’t find anything in my house.”

WHO: Jennifer Irons: Writer and Performer

WHAT: “Comic dance-theatre conceived and performed by Yukon born ‘Intrepid’ Jen. This is the story of Jen’s life and survival in the remote wilds of the Yukon Territory, Northern Canada… and her ultimate escape. A boisterously laugh-out-loud, cabaret-style survival guide to an unbelievably mad life in the frozen north, home to the coldest temperature ever recorded in North America, where tossing chainsaws is entertainment. Dark, fearless, original and bizarre, you’ll laugh, holler, quaff very questionable cocktails and learn to be Bear Aware. And it’s all (mostly) true… **** (List).”

Nope! I love this town!

I did a trial-by-fire-1-night-only work in progress last year at ZOO and the next day I directed 350 local dancers in Akram Khan Company’s Kadamati at EIF in front of the Palace of Holyrood House.

Prior to that – many, many fluid evenings as audience at Fringe and some select and QUAL-ity club nights out in my more youthful years. Shout out to the Paradise Palms who I Shazam the shit out of every time I’m there! (@edinburghpalms)

I once ‘bumped’ into Prince Charles getting out of his helicopter at the bottom of Arthur’s Seat. Much to my mother’s chagrin, who was at that exact moment was at the castle looking for him…

I got a new SWEET new plaid shirt from home. Marie Kondo’d my life and now can’t find anything in my house. I survived a suspected heart attack… which turned out to just be a trapped nerve and then panic attack.

I directed 750 dancers in Kadamati in Paris in front of the Hotel de Ville. But the biggest thing has been turning Yukon Ho! into a full-length international production with an amazing team. I did Jill Edwards’ Stand up comedy weekender and discovered I had to actually WRITE jokes?! Who knew?

After directing mass movement shows for the past few years, I jokingly said my next show was going to be a solo. Secretly I thought it would be easier to just manage myself… Ha. Ha! Ha.

The show was originally commissioned by DanceWest and written by myself and my long-time collaborator and partner in crime, Robert Churchill. This year, we’ve expanded the team to include Sophie Powell (Long Nose Puppets) who’s also directing. Christian From (currently Associate Movement director on Rusalka at Glyndebourne Opera and has played Aslan the Lion in more productions than is really necessary) is on movement direction, Stewart Baxter (from the band LIFE) on music. Bryony Kimmings mentoring. Annie Brooks on design. Zoe Faye Kellet on prosthetics. The team have all become honorary Yukoners now. I’d venture most of them can build a fire like Ray Mears and definitely put up a tent at Glastonbury in record time. (Note, I say Ray Mears because obvs he would kick Bear Grylls ass and then serve up a delicious brunch.) Big thanks to Brighton Youth Centre, South East Dance, and Dance House Worthing for supporting us.

We’re doing artsdepot in London in November. Then definitely world domination, one backwater tent town at a time… If you’ve got a spare air mattress, we make very polite house guests… and cook a mean brunch.

Loving Witchunt by A&E Comedy. Smashing the patriarchy using magic and witchcraft. It’s damned funny and smart. They did Enter the Dragons last year so know full well how to smack the Fringe pony.  Also into the Roaring Girls. Feminist, Funny doing Beach Body Ready. And they’re from Hull so it should be ace. Black Holes by Seke Chimutenguende and Alexandrina Hemsley – intelligent and sharp. Amy Bell’s – The Forecast. Next level brilliant. I’m a Phoenix, Bitch by Bryony Kimmings. It’s a heavy one – but excellently crafted and worth it. Guru Dudu’s Silent Disco. For the most legal fun I’ve ever seen on a street corner.

Ones I’m looking forward to catching: