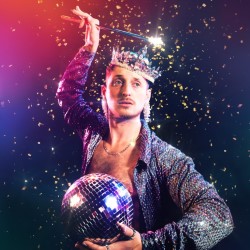 “Just because you are willing to get naked onstage DOESN’T MEAN YOU HAVE TO!”

WHAT: “Winner: Comedian’s Comedian Award, Chortle Awards (2020). After touring the world five times with Zach and Viggo and a historic run of Jack Tucker: Comedy Stand-up Hour at the 2019 Fringe, award-winning clown and international bad boy Zach Zucker returns to Edinburgh with a brand new show! ‘Zach Zucker is… popular’ (New York Times). ‘A rip-roaring hour of top-notch clowning’ ***** (Edinburgh Festivals Magazine). ‘Raucously hilarious 60 minutes’ ****½ (Chortle.co.uk). ‘A God amongst men’ **** (Scotsman). ‘A terrible comic’ ** (Times). ‘A fraud who is completely out of his depth’ * (Skinny).”

This is my sixth fringe (would’ve been eight had the pandemic not gotten in the way) and I’m so excited to be back here. I love my Fringe family more than myself, nothing makes me happier than being onstage in front of the Edinburgh audience with all of my favorite friends and people from around the world. For a month, everything feels right and perfect and I just can’t express how grateful I am to be a part of this mad festival.

Just because you are willing to get naked onstage DOESN’T MEAN YOU HAVE TO!! Turns out, people like it way more when you just “tell jokes” which is something I’ve never really understood but I’m trying to give it a go this year. Can confirm it’s way easier to just not do that and get the goods out instead.

Soooo I made this show with my best buddy Lucas Tamaren who is the frontman of the funk-punk band, Thumpasaurus, as well as my Canadian comedy partners Dylan Woodley and Jonny Woolley. I epicly produce the show under Stamptown and it’s premiering at the Fringe!! We’re hoping to tour it across the US, UK and Australia, with a 3 week run in India with our buddy Sumendra Singh who runs That Comedy Club in Mumbai!

I’m certainly biased here because I produce a bunch of shows under the Stamptown banner (Jordan Gray, Randy Feltface, BriTANicK) but aside from all our shows, my bestie and genius clown Tom Walker is back, my favourite comedian Sam Campbell, gorgeous Australian comedy darling Michelle Brasier, my circus family Cirque Alfonse, New Zealand sweetheart Paul Williams, the frustratingly talented Reuben Kaye, some of my picks for newcomer Ania Magliano, Leo Reich and Emily Wilson are all solid shouts. Also, my buddy Kevin Quantum is a killer magician and I love his shows.