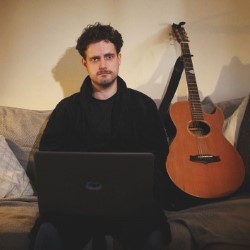 “The show is loosely about identity.”

WHAT: “2017. I’m an angry insufferable mess. I don’t leave the flat for six months. 2018. Same. Now I call it working from home. A comedy show for hermits. James Meehan is a comedian and ex-member of Gein’s Family Giftshop. You might have seen him on the telly in Inside No 9 or Drunk Histories, or heard him on BBC Radio 4 Extra’s Newsjack.”

WHERE: Just the Tonic at The Caves – Just Out of the Box (Venue 88)

I have been to Edinburgh for the full run every year since 2013.

I wrote my show and am producing it myself.
I hope to tour it afterwards.

The show is loosely about identity and not leaving the flat for 6 months after a torrid old time involving disasterous decisions with work and the people I chose to work with.