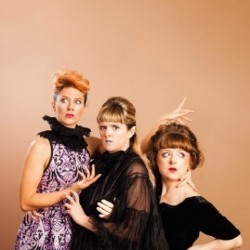 “A tap-dancing cactus, a giant diva with a dental malfunction… that kind of thing.”

This is our third time to Edinburgh! We lived in the UK for two years and were lucky enough squeeze in two Ed Fringes. We moved back to Australia last year, but we’ve saved our pennies and we’re coming back!

It’s been a total whirlwind since our last fringe. So much has happened. But we made it to the TV alongside the big wigs this year. That was pretty mega for us. Hopefully, we’ll manage to sneak back on again soon.

‘The Travelling Sisters’ is made up of Lucy Fox, Laura Trenerry, and Ell Sachs. We met at uni and have been creating, performing and producing together for four years. As well as working together we’re the best of mates which makes life and performing pretty damn exciting. Our show is a comedy sketch- fast-paced, wig laden, costume-heavy stupidity with a touch of the absurd. A tap-dancing cactus, a giant diva with a dental malfunction… that kind of thing. After Edinburgh, we’re taking it to Buckingham Palace.