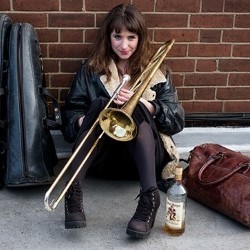 WHAT: “Debut hour (Best Newcomer Musical Comedy Awards 2015; runner-up Bath New Act 2016; as heard on BBC Radio 2/4 Extra). When asked by her little sister for some career advice, Faye realised she’d spent the last half of her 20s trying to make trombone comedy work. Join Faye for an idiosyncratic tale about a South London foster family, why she’s decided she wants to become a step-dad and what it’s like to be quite often the only woman in the band. ‘Treacy’s charm soon wins us round… her one-liners are expertly crafted and sharp’ (List).”

It’s my first time doing a full hour! I’ve been on shared bills and done a half hr show in the past on the free fringe but this is the big one, which I’m very excited for.

My shows called The Problem With Faye Treacy. I wrote it and it’s about my life growing up in South London with my folks and foster siblings (My mums started to collect more kids than Madonna) and how I made a break for it basically with a trombone into the classical music world. I’m hoping to take it to a few festivals in Australia next year and maybe New Zealand.

I previewed with Sarah Keyworth the other week and her shows great! Also I’d say check out Darren Harriott and Harriet Kemsley. I’m a big fan. For a fantastic storyteller and comedian, I’d say Chris Stokes is definitely one to watch too! His new hours hilarious!