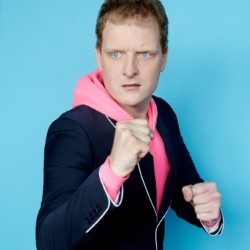 “I have a director named Paul Bryne but he does not like being spoken about.”

WHAT: “Last year, John Hastings was hit by a car and broke his arm. He then became homeless (his choice) with a long distance girlfriend (her choice) and now has a lot of thoughts on pigeons and bicycles (your choice). Now he’s written this comedy show. A tale of displacement, death and denial (don’t worry, there are jokes too). As seen on Comedy Central.”

Nope, this is my 7th fringe IN A ROW! I am excited about this one because honestly, I think if anything I am funnier than I was last year.

I wrote this silly bill show with all the jokes and trappings all by my lonesome. Well, I have a director named Paul Bryne but he does not like being spoken about so I get to take all the credit. This show is premiering at Edinburgh and everyone I know is excited about the show (because of my begging).

I got hit by a car, I became a homeless man. I continue to be in love with myself and my girlfriend.