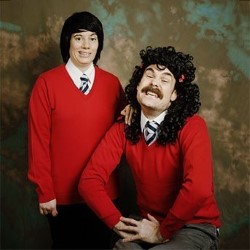 “We are more conscious of our age among all the whippersnappers at the fringe.”

WHAT: “Curly is convinced that appearing youthful is the answer to success and he will do whatever is necessary to get ‘youth’. Cut a long story short. Short ruins it. If you thought pink custard was good you’ll crap your pants over this!”

WHERE: Pleasance Courtyard – Pleasance That (Venue 33)

No we have been coming to Edinburgh for many years in various guises but this is Short & Curly’s fifth show in Edinburgh.

Paul (aka Curly) is turning 40 this August so naturally, we are more conscious of our age among all the whippersnappers at the fringe, he’s panicking about that so we nostalgically take a look back at his memories. They end up a bit warped because Short is interfering with them trying to prove to him that age has no importance as long as you’re still having fun.

It’s a fast-paced, multi-sketch, multi-character show that we’ve crammed as many ideas into it as we could, it aims to be as much fun for the audience as possible.

We write it and produce it together but we’ve been working on the show with Marek Larwood from ‘We are Klang’ as an outside eye.

We were already a couple romantically and then in 2010 we started running a comedy night in London and it seemed only fitting to become the resident sketch act.

We have been previewing the show around the UK. Afterwards, we will probably do the show once more in London and then put it to bed.

On a beast theme, two of the sketch group Beasts (Ciarán Dowd and Owen Roberts) are coming up with solo shows so we can’t wait to check them out.