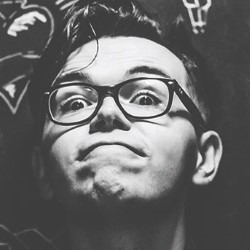 WHAT: “The debut hour from the future of Scottish stand-up. A three-time Scottish Comedian of the Year finalist, So You Think You’re Funny? finalist and two-time nominee for Best New Act at the Scottish Comedy Awards. As featured on BBC Radio 1 and 4 Extra. ‘On the cusp of something big and you don’t want to miss it’ (Daily Record). ‘A charming young comic. Macarthur-Boyd’s material is well-honed and well-delivered’ (Scotsman). ‘The personal and political housed seamlessly’ (Skinny). ‘A comedy nerd’s informed tweaking of stand-up convention’ (Chortle.co.uk).”

This is my first proper debut hour, but it’s not my first rodeo. In 2015 and 2016 I did double-handers with Ben Pope and Rosco Mcclelland, then last year I did a 45-minute solo show called The Boyd With The Thorn In His Side.

My girlfriend has emigrated from Australia to Glasgow to live with me… in my mum and dad’s house. That’s what the show is about, too, funnily enough. Also, I got a PlayStation 4! So, yeah, it’s been a big year.

Well, like I said, I’ve got my girlfriend living with me, my mum, and my dad. The show is about that living situation. 4.3 million adults in Britain still live with their mum and dad, and I think that’s shite.

The first ever run-through of it was at the Leicester Comedy Festival in a room above a pub, then the Glasgow Comedy Festival at The Stand. Since then it’s had trial runs at the Bath Comedy Festival, at The Stand in Edinburgh, at the Tringe in Tring, at Breakneck Comedy in Aberdeen, and in the corner of a pub in Bristol called The White Rabbit. I’ve put a lot of miles into making sure that it’s as good as it can be.

I’d really like to tour it post-Fringe. Fingers crossed!

The room I’m performing in at the Gilded Balloon is called The Turret. It’s a wee tiny sweatbox, and it’s great. I can recommend virtually every comedian who’s playing in it. It’s like a who’s who of modern Scottish brilliance; Rosco Mcclelland, Julia Sutherland, Jay Lafferty, Chris Forbes.