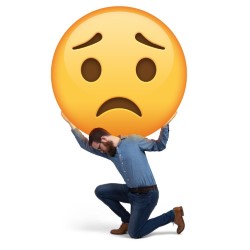 “I fly through the Fringe with an electric energy, riding those currents of exhaustion to the very end.”

WHO: Dan Simpson, Stand Up Poet

WHAT: “If brevity is the soul of wit, then emoji is the funniest language on the planet. Or it should be. Stand-up poet Dan Simpson taps into the ideograms and idiocy of our modern anxieties with a little ‘wordplay alchemy’ (FringeReview.co.uk). ‘Charmingly geeky’ (Scotsman). Glastonbury and BBC regular returns to the Fringe with whip-smart words and playful performance. Praise for previous Fringe shows: ‘The perfect antidote to the perpetual screen-burn of our internet-obsessed age’ (Scotsman). ‘A talented wordsmith… poetry for the selfie generation’ (WestEndWilma.com).”

This is my fifth Edinburgh with a solo show, and the ninth time I’ve headed up to be part of it in some capacity. As a solo performer who does everything for the show – from writing and performing to producing, marketing, and press – I fly through the Fringe with an electric energy, riding those currents of exhaustion to the very end. In 2016 I managed to perform in over 90 shows – two of my own each day, plus guesting anywhere else. I absolutely love it.

I did a big project in Chicago, with the Botanic Garden there. I’m part of a popular science partnership (Dr. Illingworth & Mr. Simpson) and we flew over for nearly two weeks to partner up poets and scientists, and get them to make spoken word pieces together. I also ate a lot of deep dish pizza, which is the very best food in the world.

They say a picture paints a thousand words: so how many does an emoji depict? Can poetry survive in a world of love hearts, shocked cats, and smiling poop? I love thinking about the impact of technology and how we communicate – essential things for a poet, or any writer / performer – so the show is influenced by that. It’s also a whole bunch of pieces I’ve written over the past two years as I work towards my second collection of poems.

Rob Auton is always a fantastic experience – I can’t fathom what he does, and he’s super unique. A big shout out to all the other spoken word shows, especially on the Free Fringe – the biggest home to the genre at the Festival. I can’t not mention my other show Stand Up & Slam: a battle night where we get poets to fight comedians (with words) – that’s 8.45pm each day at Subway on Cowgate, and we have acts like Harry Baker, Mark Grist and The Story Beast going up against the Fringe’s finest comedians!