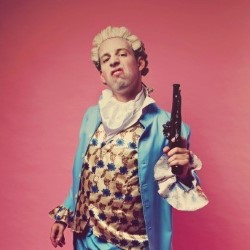 “I had my appendix taken out. It was a huge moment in my life when I stared death right in the eyes and kicked it in the balls.”

WHAT: “Spencer Percival has one claim to fame. He’s the only British Prime Minister ever to be assassinated. Unfortunately, no one’s ever heard of him. 206 years later, Nick Hall tells his story. In this inventive and hilarious journey through history, Nick brings alive the world of the 19th century, while drawing parallels with the present. In this age of Brexit, Trump, Corbynista and Maybot, could we still learn something from the past? As seen on BBC Two and Three, and heard on BBC Radio 4. ‘Brilliant’ (Times). ‘Crackingly original’ **** (List). ‘One not to miss’ **** (Skinny).”

This is my 8th year of coming to the Fringe! There’s something very depressing about writing out that sentence. That said, once you come up here it’s a great fun and you wonder where else in the world you’d like to be. Then by the end of August you can’t wait to get away. And the cycle starts all over again…

I had my appendix taken out. It was a huge moment in my life when I stared death right in the eyes and kicked it in the balls. The moment when the nurse turned to me and said, ‘Yep it’s definitely appendicitis’ was a truly life-changing bombshell which put things in perspective. Coming round the next day after the general anaesthetic I swore that I would lead life to the full, and not waste a single moment. Six months later I’m eating Pringles while I write this and preparing to go to the Fringe for the umpteenth time. But I’ve got a really good show. Which is actually sort of about death.

My show is called Spencer – it’s written and performed by myself (egotistical I know). There is no company apart from myself – I’m a one-man company. A manpony. Although that just sounds like a man and a pony were genetically fused together in a Fly-like scenario. It’s directed by an wonderful lady named Jess Lazar and is being premiered in London in the run-up to Edinburgh. As for what happens after, touring around London and the UK hopefully, and then who knows? By the way that isn’t a rhetorical question, I’m genuinely asking the reader what I should do next.

You should check out the hilarious stand-up stylings of Dan Cook. He’s a brilliantly funny man who also happens to be my flat mate in Edinburgh. I’m therefore recommending him in a bid to sooth his gigantic ego and try and curry favour when it turns out that I accidentally used his milk.