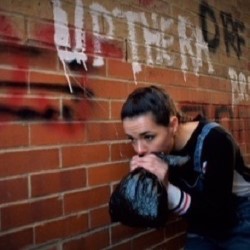 “I took last year off to pay all the credit cards and loans I took out to fund my work!”

WHAT: “Inspired by real events, Killymuck is a housing estate built on a paupers graveyard in 1970s Ireland. Niamh navigates life through the parameters of growing up, with the trials and tribulations of being a kid from the benefit class system. Lack of opportunity, educational barriers, impoverishment, addiction and depression are the norms as the struggle to escape the underclass stereotype becomes a priority. From school trips organised as cross-community excursions to unite a fractured post troubles town, to finding the humour within an estate crippled with misfortune. From award-winning, critically acclaimed writer of Belfast Boy, Wasted, Mule.”

In 2004 I went on a Hen party to Edinburgh and one of the only things I can remember was the Frankenstein bar and a very drunken open top bus tour!

This will actually be my fourth Edinburgh Fringe. My previous shows include BELFAST BOY in 2014 (Sold out and won; The Stage award for Excellence and The Fringe Review award for Outstanding Theatre), WASTED (Sell out shows transferred to New York and London) in 2015 and MULE in 2016 (Sell out shows transferred to London and Northern Ireland). I took last year off to pay all the credit cards and loans I took out to fund my work!

I cleared my credit card, working a million Restaurant hours!

My company have been invited to Baltimore and Washington DC, at the end of August to present Wasted as part of a college campus tour.

I am the Writer/Director/Producer. The show is a solo piece of theatre and will be performed by Aoife Lennon. I have known Aoife from doing a Drama Degree in Derry N.Ireland over 10 years ago and I have worked with her on a few pieces, most notably, our last EdFringe piece Mule.

Killymuck is an exploration of issues surrounding class, that I have experienced throughout my childhood and adult life. I am from a council estate, grew up on benefits. With the rise of unpaid internships, unpaid work in general and cuts to arts funding. I felt compelled to write something. We are in danger of the arts becoming solely an elitist playground. Yes, ‘Fleabag’ is fantastic but it is yet another middle-class voice. Where is the representation of the underclass, have we been forgotten? No one speaks of us. It’s time to change that.

I am always a little bias towards other Irish shows and in saying that, ‘My Left Nut’ by Michael Patrick and ‘Maz and Bricks’ by Eva O’Connor both look incredible.