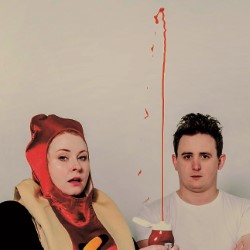 “Last year went embarrassingly well. Reviewers and audiences liked it. We really weren’t prepared for that.”

WHO: Amy Gledhill and Chris Cantrill, The acts

WHAT: “Surreal comedy from Yorkshire’s finest, meat-themed double act. Join Chris and Amy in a gag-packed mission to crown their town the City of Culture. Find out what culture is, who’s been secreting it and why that stain won’t wash. A multimedia adventure for fans of economic recession, blue top milk and Bigfoot. The follow-up to the duo’s debut show which was recorded for NextUp and transferred to the Soho Theatre. ‘One of the best adverts for modern alternative comedy’ **** (EdFestMag.com). ‘Inventive and increasingly hysterical’ **** (Skinny). ‘Brims with ideas and creativity’ **** (ThreeWeeks).”

It will be our second time up there as a duo. (Chris did a solo show in 2016 and the twelve people who saw it have never been the same since.)

Last year went embarrassingly well. Reviewers and audiences liked it. We really weren’t prepared for that. We were brought solidly back to Earth though when we got back to the confused grimaces of comedy clubs of the north-west.

We had a run at Soho Theatre which was a huge deal for us. On the last night all four of our parents were on the front row, and Chris had a tiny cry on stage, which has never happened out of joy before. Amy’s dad shook everybody’s hand in the theatre bar and since then we’ve both had the confidence to complain in restaurants.

Regeneration Game is a bizarre comedy show, loosely (oh so loosely) based around a City of Culture bid. It features trolls, unsettling illustrations and is packed tight with gags. We write (secrete ) and produce it ourselves with the overseeing, ever-twitching eye, of our agent.

We met whilst performing as solo acts in the Leicester Square New Comedian of the Year final and both of us ended up relocating to Manchester and needing someone to have a Cheeky Vimto with.

Regeneration Game will premier at the festival this year and if the friendship survives, it will be going on a small tour of the UK early next year.

We’d highly recommend having a day at The Monkey Barrel, their programming is innovative, often silly and of a really high standard.