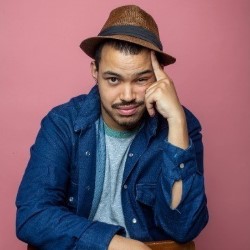 “It’s all been upwards in the last twelve months.”

WHAT: “Award-winning Archie Maddocks presents an hour of biting, provocative, unflinchingly funny comedy where he explores his deepest and darkest thoughts, exposes his flaws and interrogates his personal connection to Grenfell Tower. Fresh from a stint in the BBC Writersroom, having previously toured South Africa and Europe, this ‘super cool, super smart storyteller’ (Bruce Dessau, BeyondTheJoke.co.uk and Evening Standard) hilariously explores life, love and loss with a candid authenticity, marking him out as a ‘real highlight’ (BBC Introducing).”

This is my fifth year in a row, but third show, if that makes sense? I was up before doing compilation shows and stuff, but this is my third hour long show. I personally love the madness of it all, running in to people you don’t get to see as often as you’d like, drunken emotional conversations at 3 in the morning on a staircase, having literally no idea what day or time it is most of the time. For me, Edinburgh is basically the most stressful holiday, you get away from everything, but you’re also in the midst of the most creative community there is. I love it. My waistline and liver says it don’t love me though…

This year I’ve progressed a lot in the TV world, writing wise. I’m also a playwright, and since the last festival, I’m formally in development with five of the biggest production companies in the UK, have written an episode for TV on a greenlit series, and written a feature film for a massive company with a view to shoot soon, I was also in the BBC Writers Room, 4Screenwriting programme and was named the BBC Writer in residence – it’s been fucking hectic. With Stand-Up, I played Soho Theatre for the first time (all because of the Edinburgh show in 2017, IlluminArchie) and filmed a special in Norway, along with playing the biggest gigs in the country and fronting an online documentary for The Hook, which is going to be released in the next few months. It’s all been upwards in the last twelve months. I’m very aware that the fall is probably beckoning around the corner though. For now, I’m just grateful I can afford Nutella everyday.

This show is about me growing into myself. Personally, it’s been one of the saddest years of my life, but also one of the most joyful – which I guess is what life is about, managing the ups and the downs and not getting drowned in either wave of optimism or pessimism. I’m more aware of what I think now, I’m more grounded in myself – and I’m also angrier than I’ve ever been at the state of things around me. This show, and how wanky is this, actually ‘means something’ (I feel like such a prick for writing that) and, while I’m never proud of anything I do (minus eating a 5kg tub of Nutella in 4 hours) this is the closest I’ve come to actually being me and being truthful on stage.

Obviously, see my show. Apart from that… I would say get lost and just stumble into things. Go and see something you don’t think you’ll like, watch something mad and experimental – go and see someone you hate to see if your mind can be changed and your horizons shifted. I think we tend to go and see things we’ll know we’ll like too much, and that’s great, but sometimes it’s good to see what you don’t like and why. I, for example, didn’t know I wasn’t a fan of someone ramming their hand up their arse, all the way up to the elbow (!) and then licking it clean until I saw it. But I did see it, and now I know I ain’t a fan of that shit (not a pun. Is that a pun? I don’t think I know what a pun is).