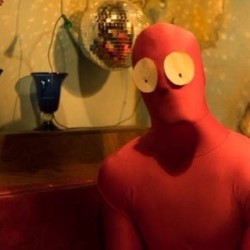 “I became a legal knife-wielding Oyster Shucker. I don’t know how. I don’t know why. But all I know is, I smell like fish more regularly than one man should…”

WHAT: “1998. England are out of the World Cup. JK Rowling is still pretty skint. Richard Bacon has been framed. Or did it really happen? Or was it all just a cover-up of something much, much bigger? Get your badge on, here’s one we made earlier, welcome to the set of Very Blue Peter. A bonkers, immersive, party of a late night show – bringing you back to your childhood whilst destroying the innocence of all of it.”

As a performer, yes this is my first time at the Fringe and i’m pretty excited! However, I came up last year working with Eastlake Productions helping with shows such as This Is Not Culturally Significant and Your Ever Loving! It was utterly ridiculous. RIDICULOUS.

This year has been a pretty crazy one. Got seen for Genie on the west end… wasn’t quite right for that. Helped my mates reopen an immense theatre in Tottenham Hale, N16 (even though it’s N17). But by far, the most important thing that happened this year was far away from acting. I became a legal knife-wielding Oyster Shucker. I don’t know how. I don’t know why. But all I know is, I smell like fish more regularly than one man should…

Very Blue Peter is my love child with Eric Andre and Rik Mayall (even though they don’t know it yet). The show centres around the Richard Bacon fiasco of 1998. After being supposedly caught in an illegal adult act, Richard Bacon was fired from the Blue Peter. However, this was all a cover-up for something much, much bigger! TCC (The Children’s Channel) had been cancelled on the 3rd April and 5PM for unknown reasons. After the cancellation of their channel, three disgruntled presenters broke into the BBC studios, Locked and blocked all the doors, kidnapped the school kids, the guests and the techies for that day’s show. They then forced the BBC to record this episode in hope of regaining some credit in their careers, but everything went disastrously wrong… The episode has only just been rediscovered and will be presented in front of your very eyes.

The show is being produced by Eastlake Productions, who recently opened Flesh & Bone at the Soho theatre! The company itself came about through a mix of drinking, football, stupidity and a little bit of theatre. After having worked with almost everyone here before, I knew they’d be the right people to go crazy with! We’ve only done a few in-house previews before hand, so Edinburgh will be getting the proper first previews and run! This is really exciting and we know that if it goes well, then it will go really well and we’ll hope to do a run in one of the theatres Eastlake Productions works with on the regular. if it goes wrong, I’ll find a nice little shack in Lancashire and retire. At 25.

There are a number of good bars to see at 12 o’clock at night. I like the one with the sofas in, that’s pretty neat. And Frankenstein’s for the mad one. Oh yeh, in terms of theatre, probably Loop, probably Ouroboros, maybe some of the young lads Naughty Corner’s productions…