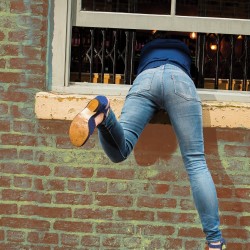 “I wrote the play based on an experience I had when I was in jail for drugs offences many years ago.”

WHAT: “‘The history of England jumps off its axis. 2am, 8th July, 1981, 20 cities across England burn.’ The night of the Manchester uprising. That night should change everything. Drawing on his own personal experience, Ed Edwards’ script crackles with anger, humour and authenticity as he chronicles the fallout for communities crushed by the heroin epidemic at the height of Thatcherism. Shot through with home truths about the road to recovery this is an epic love song to a lost generation.”

We came to Edinburgh a couple of years ago with a show called Life by the Throat which got a bunch of five star reviews and was one of Claire Z from Fringebiscuit’s top three picks of the Fringe.

In terms of work, probably Nick Hern agreeing to publish my play along with a political essay of the history of smack and crack that we couldn’t squeeze into the play itself. The play has to follow characters and it’s hard to get pure history into something like that, so the essay made me feel like I can get to the bottom of the whole thing, as well and entertain an audience. Not that there isn’t some history in the play itself, just we didn’t want to max out our credit card.

I wrote the play based on an experience I had when I was in jail for drugs offences many years ago, when a lad who was in the Liverpool riot made a speech one night on the landing about how he and the rest of the Liverpool youth had taken Liverpool the night of the Toxteth riot, only to find themselves “jumping over the courter at the office toting an uzi” (sub-machine gun) trying to feed a drug habit. I’d always felt there was a connection between the 1981 riots and the heroin epidemic and thought it was a good subject to write about. Add in some fucked up love and that’s the play. It’s being led by Cressida Brown of Offstage who read the play when it was a finalised in the Theatre503 playwriting competition. I’d written it to direct myself, Cress said if I let her direct it, she’d do all the leg work production-wise. That was enough to persuade me! Since then, Annabel at W14 Productions and Ali from Ransack Theatre have got involved, then Soho came on board. No premiere, it will go on to Soho Theatre for three weeks in September.

Anything by Kieran Hurley.