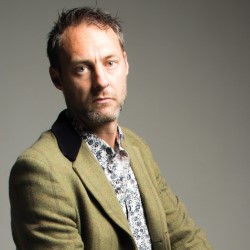 “I present a robust defence of Donald Trump, celebrate consumerism, break down prejudice against the white working class and show the inherent immorality and impracticality of socialism.”

WHO: Leo Kearse, I’m the comedian

WHAT: “Scottish Comedian of the Year, Leo Kearse returns with the follow up to I Can Make You Tory. Poking fun at liberal sanctimony and hypocrisy, Leo takes on millennials, #metoo, environmentalists and Jeremy Corbyn, showing why socialists are selfish and Trump is great. ‘A giant of the art’ (Chortle.co.uk). ‘A solid hour of honest funny which will change your attitude’ (Scotsman). ‘He is warm, very funny, and deserves his title… a lotta laughs’ (TheClothesline.com.au). Warning: not for people who start online petitions.”

This is my 7th time at the Edinburgh Fringe. That sounds like a lot, but I wasn’t really trying to be good at comedy until a couple of years ago.

Some videogame producers who loved last year’s show “I Can Make You Tory” cast me in their videogame “Super Seducer 2” and flew me out to Belarus to film my scenes. It’s a hugely popular but controversial game – the guy behind it is pickup artist Richard La Ruina and the game basically teaches men how to chat up women. Obviously, showing men how to behave respectfully around women is now seen as sexual harassment so the Guardian campaigned to have “Super Seducer” banned.

In “Super Seducer 2” I have a scene where I chat up a feminist in a bar. I spent a lot of time getting punched in the head by a 6’1 Russian woman called Anastasia. In another scene, I’m performing comedy and the player gets to choose which material I do next. It was a tough scene to film because the audience were all Russian extras who didn’t speak English so were guessing where they should laugh. Still an easier gig than Portsmouth Jongleurs though.

I write and produce my show. I used to consider myself a lefty liberal, but I feel that the left has disappeared up its own arse, taken on the worst aspects of the right (discriminating against people based on their demographics; censoring speech; making crimes out of miss-speaking). I believe everyone should be treated as an individual and identity politics are reductive and divisive.

I take a scalpel to male feminists, Labour antisemites, fat activists, environmentalists, white male privilege and #MeToo. I present a robust defence of Donald Trump, celebrate consumerism, break down prejudice against the white working class and show the inherent immorality and impracticality of socialism. If you want to escape the liberal bubble of the Edinburgh Fringe and see a raw, hilariously antagonistic show from a man who can’t help speaking his mind, this is the show for you.

They should come to see Hate ‘n’ Live – it’s a late night improvised show. The audience write down what they hate, then the suggestions are pulled out of a bucket and the comedians have to say why they hate them – no matter what the suggestion is. It’s a lot more fun and less hateful than it sounds – the atmosphere is electric as the audience waits to see how the comedian will walk the line.

Darius Davies is returning with a new show, “The Art Of The Troll”. His last show was about his time as a wrestler – he spoke candidly about steroids, fights and a broken back – and got 5 star reviews. He’s an incredible troll and has been interviewed on BBC news where he trolled them mercilessly. The show also includes that clip of Katie Price’s son Harvey saying “Hello you cunt” which is funnier than anything else at the Fringe.