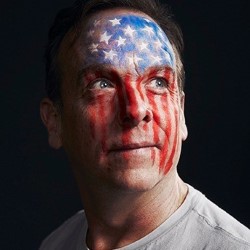 “ALAN is about a guy who feels misunderstood and left behind in America.“

WHAT:“‘Looking out over the country, this country, where I was born and raised, I wonder what’s going to become of us. Because this can’t be the future, can it? Everyone just… changing the rules?’ Roger thinks the world’s gone mad. He hates his job, his ex-wife torments him and to top it all, his girlfriend just discovered feminism. Roger’s about to lose his shit. Until he discovers Angry Alan: online activist and “voice of reason”… A darkly comic new play about masculinity in crisis from award-winning Penelope Skinner performed by Donald Sage Mackay.”

Professionally… probably a major recurring role as a “baddie” in DEEP STATE for Fox TV opposite Mark Strong that just aired in the U.K. and is currently running in the U.S.

ANGRY ALAN is about a guy who feels misunderstood and left behind in America, doesn’t get feminism and #metoo and is struggling to keep up with the changing world around him. Written by renowned feminist U.K. playwright, Penelope Skinner, and developed with an American actor (me) this play gives a uniquely funny and inside-out cross-cultural peek at why some men just don’t seem to be able to evolve and hints at reasons for the recent steps backward here and in the U.S.

ANGRY ALAN was originally developed at the Aspen Fringe Festival and in Delhi ahead of this world premiere production at Edinburgh. We are hoping to bring this production back to London for a run and then to New York and beyond. Also a TV pilot is in development.

Go check out Penelope Skinner’s other play, MEEK, and UNDERGROUND RAILROAD GAME both at Traverse. And check out SQUARE GO at Roundabout @ Summerhall.