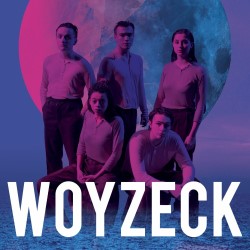 “Originally written in German, myself and Ollie Norton-Smith (the Director) are collating numerous translations and adaptations whilst also putting our own original spin on the narrative.”

WHAT: “A nation wakes up from war, the lake sits stagnant and eerie and all the while a record spins. Franz Woyzeck, a young soldier, grapples with his fragmented mind as he sinks deeper and deeper below the surface of reality. Attempting to provide for his illegitimate son and lover; rank and rule conspire to plunge Woyzeck into a kaleidoscopic dreamscape where nothing is as it seems and no one can be trusted. Following a sell-out 2017 Fringe debut, the award-winning Spies Like Us breathe new life into Buchner’s classic tale with their trademark explosive physical style.”

This is our second year returning to Edinburgh as a company, though we have all been involved as part of Young Pleasance from as far back as 2012!

Our company is made up of seven Young Pleasance graduates and we performed our debut show ‘Our Man in Havana’ to a sell-out run last year at the Pleasance as part of the Pleasance’s XYP initiative. The show was an extremely fun and silly adaptation of Graham Greene’s novel in which we used a vacuum cleaner as the only prop!

In the last day of the festival last year we were included in Theatre Weekly’s ‘Best of the Fest’ as ‘Best Fringe Debut’ which we were extremely proud of. I know that’s technically still part of Edinburgh ’17 but I’ll stick to the rest of the questions I promise…

We also went on to perform ‘Our Man in Havana’ at the Pleasance in London over Christmas which was extremely exciting!

Our new show is a fresh interpretation of Georg Büchner’s ‘Woyzeck’. Originally written in German, myself and Ollie Norton-Smith (the Director) are collating numerous translations and adaptations whilst also putting our own original spin on the narrative.

Edinburgh will be the first time we do the show but hopefully, it can have some form of life after the fringe, be it at Pleasance Islington or further afield…

It’s a show we’ve been thinking about doing for a while so we’re incredibly excited to premiere it and bring this amazing story to life with our own unique brand of physical storytelling.

God, such a huge question… As always there’s a ridiculous amount of amazing shows on offer.