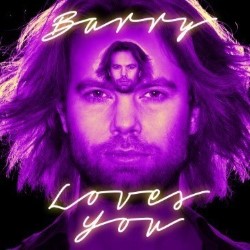 “The streets are carved indelibly in my mind. And also knees… in 2012 and 2013 I did a show on TOP of Arthurs Seat EVERY SINGLE day of the festival – I now have no cartilage in my knees.”

WHAT: “An hour of entertainment on what it is like to be the human being Barry Ferns living life in the 21st century*. Here is previous review for a previous show: ‘A marvellous, personal, beautifully constructed, laughter-packed hour’ **** (Scotsman). *This century.”

This is not my first rodeo. I have been to Edinburgh many times – I even once had a partner that lived here. The streets are carved indelibly in my mind. And also knees… in 2012 and 2013 I did a show on TOP of Arthurs Seat EVERY SINGLE day of the festival – I now have no cartilage in my knees.
Oh – I’ve also won a “Mervyn Stutter Spirit of the Edinburgh Fringe” award and a “Malcolm Hardee award”. But don’t tell anyone. I want to keep it a secret (doh!)

I did my premiere of this show in New York City. It was awesome. Such a great venue and place – David Cross was on a few days before me at the same venue and I “hung” with Aziz Anzari and Jeanne Garafalo. Touch me. I’m cool. Actually, it felt more like someone else’s life. But it was an awesome experience and I’d love to go back very very soon.

The show is called Barry Loves You. I wrote it. I produced it. The company game together inside my mother, in Dorset, many moons ago (Sorry for that image…).
It’s about connection, about love, about confusion and about biscuits. Actually, it’s mostly about biscuits*. But if I called it “Barry Loves Biscuits” I would have sounded like a dog. But who doesn’t love biscuits**?
*It’s not about biscuits
** hipsters probably

They should most definitely go and see the show of the first flyer they get handed when they leave my show.
Recommendations are random anyway – most people have 5***** for something or other. You can never tell what someone unknown is going to be like. So take the lottery and play russian roulette with an hour of your life. It’s the most exciting way to play Edinburgh. Blindly pulling that trigger and with a war veteran near by.
That – of go and see Nick Elleray, he’s great.