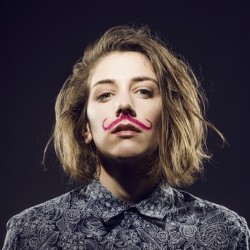 “I used to do children’s theatre when I was a teenager, please don’t research it, it’s not pretty.”

WHAT: “You’ve seen her on Comedy Central, you’ve seen her on the BBC. Now see Nottingham-born rising star Sarah Keyworth’s debut hour. Join Sarah as she tells you about her life with an important little girl and her battle against every expectation of what being a girl means. Think Girls Just Wanna Have Fun but British, deadpan and in no way similar. Tour support for Dane Baptiste, Stewart Francis and Kerry Godliman. Funny Women runner-up. ‘Charming’ (Independent). ‘Excellently deadpan’ (HuffingtonPost.com). ‘I liked that joke about her fanny’ (Sarah Millican). ‘A complete breath of fresh air’ (EdFestMag.com).”

This will be my 9th visit to the fringe but my first hour show! I used to do children’s theatre when I was a teenager, please don’t research it, it’s not pretty.

It’s actually been a steady stream of nice things since last Edinburgh. I won a bursary for the new show, I got a resident MC spot in Leicester Sq and a few other things that I can’t actually tell you but I’m very pleased about.

My show is a hour of solo stand up. I wrote it and it is being produced by a fantastic company called Fight In The Dog. I’ve been previewing it all over the UK but in very rough forms and I hope it will go further after the Fringe but it depends on how successful the run is!