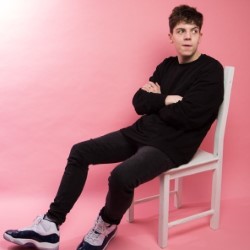 WHAT: “‘Ed Night stands at the dawn of the new age of stand-up’ (Fest). He ‘has no right to be as good as he is’ **** (Fest). ‘One of the future stars of British comedy’ (iNews.co.uk). ‘Blisteringly quick fire and jam-packed with jokes’ (BroadwayBaby.com). Edinburgh Comedy Award Best Newcomer nominee 2017. Star of BBC Radio 1’s Ed and Lauren Get On. Tour support for Paul Sinha, Phil Wang, Dane Baptiste and Simon Amstell.”

No, it’s my fourth year as a comic. But, I’ve been up before as like a runner/fan.

I wrote it (read: am telling my agent I’ve finished writing it) and it’s being produced by the amazing gang at Mick Perrin Worldwide. We met because they took out a “comedian wanted” advert in the church newsletter, and I responded because it’s been my lifelong dream to go to Scotland. Hopefully, the show will be good enough to take somewhere after Edinburgh.

They should see Catherine Bohart, Sarah Keyworth, Red Richardson, Pierre Novellie, Sid Singh, Chris MacArthur Boyd, and Rosco Mclelland and a million other shows cos you should support live comedy. But especially those ones